Memo Akten is a visual artist, musician and engineer working at the intersection of art and science. His work covers a range of disciplines including installations, performances, films, music videos, online works and mobile applications. Driven by the urge to make the seemingly impossible, possible; and awaken our childlike instincts to explore and discover; he explores new ways of creating and performing images and sound. Playing at the border between abstract and figurative, he extracts and amplifies the unseen relationships within images, space, movement, sound and time. While his primary crafts include writing software, working with and appropriating new technologies; above all his work focuses on creating powerful emotional and evocative experiences.
He is on the selection committee of ACM SIGGraph, computational consultant on the Architectural Associations’ Design Research Lab and one of the core contributors to the openFrameworks project. A strong supporter of open-source and believer in the sharing of knowledge, he gives lectures and workshops around the world. In 2011 he co-founded Marshmallow Laser Feast; a collective of like-minded artists, designers, engineers.

Memo was born and grew up in Istanbul, Turkey. Fascinated by the hacker demo-scene of the 1980s, he started programming music & graphics demos at an early age on the 8-bit computers of the era. In 1997, after completing a BSc in Civil Engineering, he moved to London where he worked in the video games industry as an artist, designer and programmer. Leaving the video games industry in 2003 to pursue more emotional experiences, he now balances his time between personal work, collaborations, research and commissions. 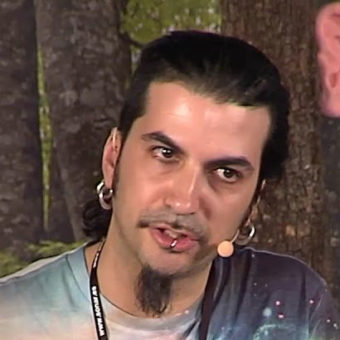 Trying to Understand the Nature of Reality