The story of Reed + Rader begins over a decade ago on the internet when Matthew messages Pamela and says, “Hey I like your blue hair”. After stops in farm-town and coal country America they ended up in New York City where they joined forces while attending the School of Visual Arts for photography and Interactive Telecommunications Program (ITP) at New York University.

Somewhere around 2007, Pamela said to Matthew, “Hey let’s stop taking still photos, push the internet – this place we love dearly – as a visual art platform, and make images that move.” Since helping to make the animated GIF a legitimate photographic editorial medium, Pamela and Matthew have continued to imagine the digital possibilities in video, virtual worlds, and both internet based and physical interactive installations. Regardless of medium, Pamela and Matthew’s work is about the playful connectedness of the internet where everyone wears a mask and can be anyone, anything and anywhere they can imagine in their digital dreams.

When not day dreaming about vacationing at Disney World Mars, Pamela and Matthew can be found gardening, making stuffed animals talk and wrangling their four crazy cats. They live in Brooklyn, New York. 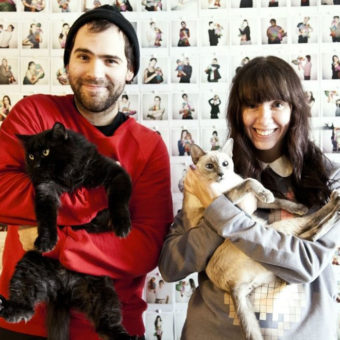 Cats, Dinosaurs and A Lot of Pizza