Established in 2004 at the age of 18, NoPattern Studio is the Chicago-based practice of pioneering artist & designer Chuck Anderson. Known for his surreal use of color & light, juxtapositions of traditional & digital mediums and endless experimentation, Chuck’s work has become highly sought-after by a wide spectrum of brands and collectors. In 2010 at age 25 he was named a ‘Design Icon’ by Computer Arts Magazine and now 36, Anderson’s client list includes ESPN, Apple, Nike, Microsoft, New York Times, Vans, Target, Burton, and the Chicago Bulls, Cubs, and White Sox. His entry into the NFT space has been an exciting one, selling out all works to date and subsequently becoming represented by YMU Arts alongside artists such as 3LAU, Tyler Shields, & Oseanworld. 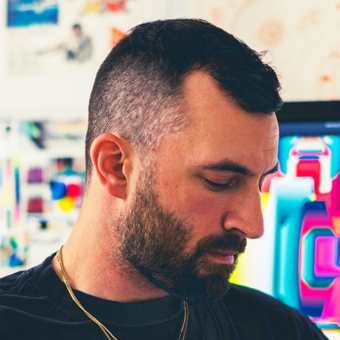