November 17-18, 2012 2012-11-17 00:00:00 2012-11-19 00:00:00 America/Toronto FITC Vancouver 2012 FITC is heading to the beautiful west coast and bringing all of the design and technology goodness we’re known for. Spend one day at a hands-on workshop and then another two days filled with presentations and panels led by some incredible digital creatives. We’ve pulled… Vancouver FITC Vancouver

In 2001, Myron began his work with the Trailer Park Boys in Halifax after completing a diploma in Visual Communication at Medicine Hat College. Following that he spent 4 years at the Banff Centre For The Arts as an Interactive Consultant and Lead Designer for the online digital arts + culture magazine, Horizon Zero.

In 2010, after many years of freelance interactive design and animation, Myron joined Switch United as their youngest Art Director at 28 years old. It was there that he co-created interactive installations for the Vancouver 2010 Olympics. Myron was awarded Best Interactive Designer for his installation work at the Canadian New Media Awards in Toronto, Ontario.

Myron is a full-time instructor at the Vancouver Film School and is also a recent MAA graduate in the field of Media Arts at Emily Carr University of Art and Design where he received the Governor General’s gold medal for academic excellence.

Currently, Myron resides in the East-Side of Vancouver and loves it. He has maintained a steady art practice producing interactive projects and animated short films. He doesn’t sleep a lot and he loves gingham….still. 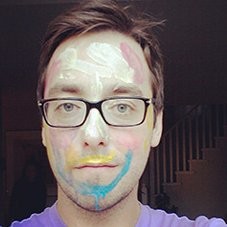