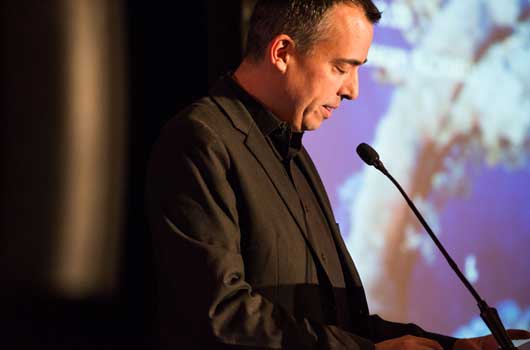 Failure stares us all down from time to time. Not every project is a win. Not every client leaves happy. The creative journey can leave anybody feeling beat. That struggle is well-known, but what was a surprise this morning was hearing how failure has touched FITC’s own founder and director Shawn Pucknell. During an intimate B-Side session on April 11, Shawn talked openly about his road to FITC. Before the company’s international success, stability and growth, he had to survive personal bankruptcy and nearly lost his marriage.

Hearing Shawn speak was both inspiring and uplifting. He put his relationships, health and finances on the line to create the modern FITC. In the process, he nearly lost it all. Those mistakes gave birth to lessons he shared with a small audience. After everything, Shawn Pucknell showed he is truly a man without fear.

The B-side sessions at FITC are a different beast than most conference breakout sessions. Away from the big lights and stages are a more intimate experience than the large breakout events. People sank into low-slung chairs and sprawled on the floor to hear Shawn speak. Fittingly, he sat in a director’s chair at the front of the room, and started to share his story.

Shawn’s talk was honest and simple: black slides and white text were broken up by ID cards from his past jobs. And Shawn’s had a lot of jobs. His story wasn’t about overnight success or growth-hacking. It was about a 19 year-old who didn’t know what to do when he finished high-school. That 19 year-old went on to work twenty-two different jobs in the next seven years, everything from black-jack dealing to managing movie-stores.

Something sparked when he finally landed a plumb job with the government: it was the worst job he’d ever had, but with enviable enough benefits and salary to keep him there forever. So at 26 years old, Shawn decided instead to retire early and remake himself. He started by taking some classes and learning Flash, which would take him on a very different journey than the one he was on before.

Shawn described feeling at that time like everyone else had their lives figured out—that they had direction. What he learned was more important was being able to adapt. Over time his goals changed. Once upon a time he just wanted to own a night club. (Eventually, he did.) After he started honing his skills in Flash, his goals became about projects, meeting new people and exchanging ideas.

Shawn’s new Flash skills led to some great jobs including MacLaren McCann’s Interactive Group, then BlastRadius doing a project for Lego in New York. His inspiration for what would one day be FITC wasn’t born from success, though. Shawn was invited to speak at an early “Flash Forward” conference in San Francisco. His talk utterly bombed because he failed to prepare. He left appreciating that loss, and based on how organized today’s FITC events were, I think he passed that lesson down to his team.

Passion was a key theme in Shawn’s talk: passion about Flash led him to organize events to share that feeling with other people. Those gatherings organically grew to a point where they needed to be scheduled and booked in advance. His plan wasn’t synthetic; it happened naturally because he was doing what he liked to do—and he happened to get good at it.

Shawn sharpened his technical skills as much as possible and eventually reached a crossroad: he could either stay on as a developer or try to make his own thing. Eventually his freelance work became self-sustaining enough to create his own venture with a partner. Then came the real set-backs.

Embarking on an entrepreneurial journey came with its share of risk. However, it wasn’t his new Flash partnership that nearly sank Shawn—it was the nightclub business he had walked away from years earlier. Still on the books as a director, creditors came knocking to pay old debts the nightclub had incurred. Shawn then learned the meaning of “joint and several liability.” After his partner went bankrupt, the full business debt transferred to Shawn. He too had to declare bankruptcy.

At that time, Shawn said coming back from bankruptcy was a rebuilding process. It was a personal and financial disaster—but he survived it.

Shawn and his new partner went on to take their Flash business as far as it could go. Even that petered out. Shawn said they just didn’t have the skills to make the “sprint” to take it to the next level. Not knowing what exactly he’d do next, he kept doing Flash events. At one event he started talking to a publisher and got a book gig. FITC kept growing.

At the peak, Shawn described what his work had accomplished. He had launched Element 156 – Digital Media Center on Augusta Street in Toronto. It was Toronto’s FITC headquarters, a next-gen art gallery and a meeting place for the digital media community: host to events, shows and parties. However, it all came crashing down at once.

Element 156 financially collapsed under the weight of collective debts. Shawn owed $90,000 and a doctor told him he likely had lung cancer or a kidney tumor. His marriage was also crumbling.

At this point in the talk Shawn teared up. This was obviously still a very real memory for him, and it was painful. His health, finances, relationship, and business were all falling down. It was “a tough period in his life.” To come back, Shawn had to borrow money from friends. He put work into resolving things with his wife. He underwent medical testing and resolved his health issues, which turned out to be less serious than cancer. Element 156, however, did not survive. That struggle helped teach some important lessons to Shawn, which he then went on to share with the audience.

1. Learn to say “no” While running FITC and Element 156, Shawn was also lecturing at local schools, judging competitions, and doing everything anyone asked him to do. He realized that being pulled in so many directions nearly killed his company. Shawn started getting critical about what he said “yes” to, and made sure he had his sh*t together first. Learning to say “No” was the first step.

2. Budgets—“have one” Financial failure left a mark on Shawn. Although each individual component of the Element 156 combination had a budget and was solvent, there was no overarching global budget. Each mini-business was lending and owing money, and eventually cash flow caught the whole organization off guard. Shawn explained that, “cash flow is the killer.” He said that everyone should know their burn. Get a budget and avoid getting surprised.

3. Goals—“set them” What do you want your life to be? Even though Shawn’s story was a successful one, he explained how his idea of success had changed over his life. At first it was to make money (and more simply, to own a nightclub). Slowly his goals changed to describe how he gets to spend his time every day. Life, he said, was more about the people we spend time with and our environment. He explained that we should all be trying to craft that environment, thinking about where and how we want to work, and what makes us happy.

Shawn closed with a few ideas. Failure hurts. Closing businesses hurts. But they’re both survivable, and might even make you stronger. The best part was that after falling down so many times, Shawn said he wasn’t afraid to fail anymore. And you shouldn’t be either.