Gavin Strange – No Boundaries, Only Possibilities 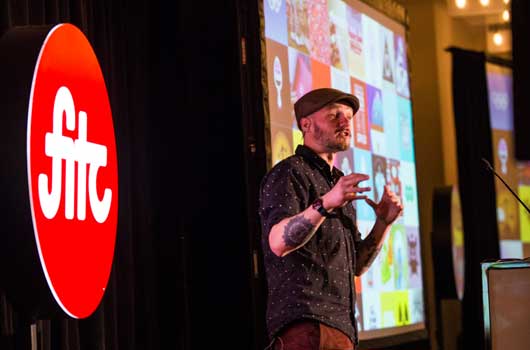 FITC Toronto kicked off on April 12, 2015 with Bristol, United Kingdom’s Gavin Strange. During the day Gavin designs graphics for Aardman, the legendary studio that brought Wallace & Grommet to the world. At night Gavin transforms into a creative polymath, making everything from toys to 8-bit animations to the giant sheep sculptures that have taken over his home town. Oh yeah, and jelly droplet characters are kind of his thing, too. Through his talk Gavin shared that his career’s wild turns were not calculated experiments. He didn’t set out to make sculptures, films or games. Instead, he fell into opportunities because he enjoyed making things. Organic creation, play and natural design guided his work more than any grand plan.

In school Gavin said he was “mediocre at everything,” but pure passion led to some unexpected breaks. For example, Gavin’s obsession with drawing droplet-shaped people led to a stint designing toys. No one could have predicted his career trajectory before he dove in. Instead of saying, “No, I’ve never done that before,” he asked for more. As an example, Gavin heard his own studio’s recruitment team was looking to bulk up on freelancers for a new film. Instead of staying inside his role, he put his hand up and his graphic work was eventually incorporated into the stop-motion film. One theme that resonated throughout his talk was that for artists, different media shouldn’t form boundaries, only possibilities. Gavin fearlessly took on new media, styles, and design challenges like a kid playing in a sandbox. If there was one thing that contributed to his success, it was “auto-didacticism.” Self-learning broadened his horizons exponentially. How did he do it? According to Gavin, he lowered his standards. He had to shed the comparisons to other people. He quoted Steve Fortick: we can’t compare our daily struggle with everyone else’s highlight reel. Jelly droplet people were not meant to please anyone but Gavin. What’s already been done doesn’t matter because it’s almost impossible to be totally original. In Gavin’s words, the best thing we can do is be honest and put our own style on what we do.

One technique Gavin shared to broaden his skill-set was “one-nighters”—short projects doing anything, creating something, that he was interested in. Even if it was just meant to make himself smile, a one-nighter would be a short foray into a new area. We should all be doing one-nighters to expand ourselves and what we’re capable of. Gavin’s talk was fast, high-energy, and funny. Near the end he shared a GIF of dancing power rangers, just because. The main takeaway from Gavin’s talk was that we’re all lucky to be creators. Our job is to get ideas out of our heads, put them on something, and get them out there. Let’s all drop the fear, comparison, and worry and start making stuff. Tell me: what are you going to create next?