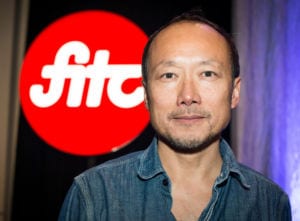 One in nine individuals at Google has a PhD. For Scarborough raised Robert Wong (he attended the same school as Mike Myers), Chief Creative Officer at Google Creative Lab, that means the six years in his current job have been most humbling.

Still, the final FITC Toronto 2014 presenter found his niche within the tech giant by answering one simple question “What can a designer do?”

Turns out, the answer is not so humble – invent the future. And it all started with an Oral B charcoal grey medium toothbrush.

In art school in New York, Wong headed to a Duane Reade pharmacy to buy that exact toothbrush – the one he always bought. Problem was all that was available that day was pink.

He actually left the store by the time he thought to himself, why can’t I buy that pink toothbrush?

Wong described this experience as living in chains that stop us from living our full potential.

“It’s all about letting go of things the way they are right now,” says Wong.

Fast forward to his time at Google. When they began hiring designers, Google didn’t really have job descriptions for them. The designers had to invent their jobs, and so Google Creative Lab was born.

So how as designers do we invent the future? Wong says to look at the immediate and figure out how to “desuckify” things.

Not all ideas are great ideas though. 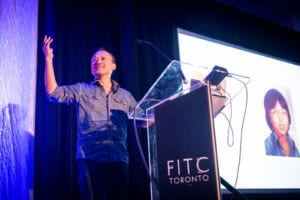 One of the first to come out of Google Creative Lab was Gmail keyboard shortcut stickers. They were a good idea at first but the bad printing job meant that the copy wore off within seven days and they were impossible to remove because of their incredibly sticky glue.

But, that was the launching point for some even better thinking including seven ways Google Creative Lab invented its own future.

In looking to their immediate environment the first thing Google Creative Lab came up with was letting people know about the stuff that already existed. That was showing the power of Google search in a video piece called Parisian Love.

Googlers loved it because they now saw their work as part of something bigger, something useful for everyone.

Another example was the June 9, 2011 Les Paul Google Doodle created by Alex Chen.

It is Google’s most famous and most played doodle with 5.4 million hours of productivity lost worldwide, and the only doodle kept up for two days because of user response.

2. Do one thing that scares you every day.

In order to show how fast the new Chrome browser was, the Google Creative Lab team attempted to compare other things to speed of the browser. In Chrome speed versus the potato, it took 67 takes to get the fries in front of the screen as the browser popped up.

3. Redesign all of Google?

When Larry Page took over as CEO he asked the Google Creative Lab "what might a cohesive vision for Google look like?”

Within 2-3 weeks the team made it tangible and came up with ten mockups that quickly became reality.

For this one, the lab called up Ridley Scott to help create a film. In a day – July 24, 2010 to be exact – Google asked the world to capture a day in their respective lives.

The final Life in a Day gave 1,200 people video credits and screened at Sundance.

The power of technology is in understanding how it really just supports life. Google Creative Lab created a video of dad Daniel Lee who launched a Gmail account to write to his newborn daughter Sophie Lee.

Wong admitted it was only just recently that he stopped tearing up while watching the clip.

6. Write the fiction of science.

Innovation happens in silos and it is rare that anyone in the process sees the whole thing,

Whether it’s the ten mockups for the Google redesign, the one poster that led to the Life in a Day film, or the one video that helped make Google Glass more tangible – designers have the power to invent the future.

Wong closed with an analogy to show that anyone has it within him or herself to invent the future.

A little girl was painting God. When challenged with the fact that no one knows what God looks like, the girl just replied, “well they will when I’m done.”