Recap: Come Take a Journey Through Time and Space with GMUNK 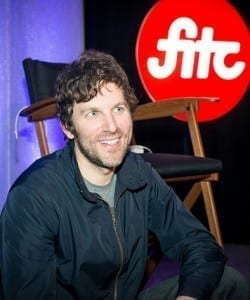 With a decade of experience in the motion graphics industry, GMUNK, warmed-up the room and essentially hit “reset” for participants with a decadent dive into his work, showing an incredible 179 slides in just 15 minutes. He describes his work as informational techie design and showed diversity, infographics, grids, holograms, robots, a music video and some might argue, controversial content that had little to do with design. “Spacing out and doing grid based design is my passion.”

GMUNK says, “As a graphic designer, presentation is everything,” and he did not disappoint. His presentation included examples of his work from hit sci-fi movies such as Tron - Legacy with Jeff Bridges and Oblivion with Tom Cruise (check out the dashboard at 0:42 GMUNK designed it for the movie) both directed by Joseph Kosinski.

The dashboards in Oblivion are very complex and track countless systems. GMUNK says he took his inspiration from weather grids for the dashboard and flight simulators for the design of the bubble ship. However, he pointed out that this type of design is only good for the movies and that people in real life want things to be simple. They want a white background and one button.

He said the key about any sort of UI design is to lay down your grid and that grid becomes your bible. Creativity comes by filling it in in different ways. A direct quote from Tron - Legacy, “The grid, a place of infinite possibility,” is most certainly something GMUNK would agree with.

This stuff can be done with a small team (they were a team of 5 for Oblivion) but it is important to work with really great people. Make sure it’s someone who is going to guide you in the right way.

GMUNK moved to San Fran in Jan 2013 to work at Bot and Dolly, a creative robotics company. As a design director he lead the creation of a demo video for the company to showcase their capabilities. Based on the five fundamentals of magic; transformation, levitation, intersection, teleportation and escape, the video projects animations onto large screens controlled by robots. In this project he wanted to start with a simple canvas and applied a simple graphic pattern with illuminated geometry. The result was a dance with choreography between lighting and content projected onto moving panels controlled by robots.

His insight from this project for designers, “I believe in being inspired by things and paying homage and taking them to the next level. There is a difference between blatant rip-off and taking inspiration from others in our industry and giving credit.”

A recurring piece of advice throughout his talk was that we shouldn’t wait for someone to hire us to make work. To that end, GMUNK showed a music video he took 3 months to create for the band Tycho for free. To establish the right visual representation of this epic, he utilized full spectrum photography to tell two stories from the perspectives of two characters. He wrote the narrative to the video based on the beats of the song and carefully crafted mood boards. He found that live action directing is different from graphic design because of variables out of your control. “You need to embrace them to make your shit work out”. He found the low budget approach to this project reminded him of days gone by, “school is the time when you are most inspired - I love that feeling.”

GMUNK ended his talk with the suggestion to use Pinterest to capture ideas and stay inspired because as a designer reference is your greatest tool. While admittedly cliche his last bit of advice was to, “Do what you love and never work a day in your life.” It’s refreshing to see someone walk the talk.

Michelle Caers (@mcaers) is the founder of DesignedUX, a user experience design firm in Toronto. She is a frequent speaker at technology, customer experience and education conferences and advises a number of start-ups on customer acquisition and product strategy. Linkedin