Recap: Do It With Everyone with Kyle McDonald 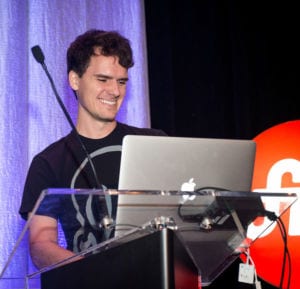 Kyle McDonald is a maker and a collaborator and it is hard to say which of these two traits has a stronger influence on his body of work. It is clear however that without either one of these things his work could not be possible. In this presentation, Kyle took us through a myriad of cool projects that spanned the globe and touched many lives.

Kyle got started writing code in 2003 with Processing where he was first introduced to a small online community he found very helpful. He went on to join Instructables a website and community on how to make things. He continued with Openframeworks and saw a pattern start to emerge. On all these community sites, the discussion is always the majority of the thing that is going on, “I put the 20% out there and the 80% of creativity comes back.”

His projects are diverse; from real time 3D scanning and mesh animations, to a music video for Broken Social Scene, to designing blue jeans, to eavesdropping on a grand scale, to face tracking through your home computer.

One project, Face OSC (found on GitHub) takes your computer camera and applies a matrix for face tracking. People were very creative with this application with some using the program to control their keyboard with facial gestures. Others used it to control a paper airplane, while one girl used facial features to tweet. This fueled the fire for Kyle to explore further projects because, “stuff I would never have thought of or had the time to make emerged from amateurs. You can tell that they are doing it because they love it.”

He took the facial recognition software to the next level by blending faces while they were tracking them. This became FACE Substitution which eventually turned into an art installation.

A subsequent project started with an email exchange for about a year with Inmi Lee. With what was described as naive excitement about a new media Kyle wanted to 3D print something. This project aimed to extract gestures for sounds just outside of our linguistic concepts to create sculptures of what the gestures look like. From this project Kyle found that, “working with people with different skill sets, leads you to create unique creative output.”

Another project, Open Fit Lab, aimed to understand what it means to dismantle the clothing industry by making jeans. Kyle wrote software in Processing to get data from open networks and with the data had a party where people made 6 pairs of jeans over two hours. The result was, “what you can do when you mix a traditional craft with a new computer craft (3D imaging).”

As a Twitter user, Kyle wanted a picture of what his followers looked like. He wanted to understand what the relationship looks like between an individual and the masses. This project coincided with the Twitter IPO where he open sourced his Twitter account and let anyone “tweet” on his behalf. This lead to some interesting insights on identity, “online there can be a separation of who you are in your mind and who you are online. However if someone knows your password they can be you. The only line between this (you and them) is a password.”

In one month there were 3000 posts from strangers on his account. Kyle found himself as, “a new person represented by this crowd of people acting as me. I freaked out as if I had lost myself online. It felt like my Twitter fell asleep, much like a limb, I wanted to make something happen but I couldn’t do anything about it.”

Kyle’s experiments in crowdsourcing and collaboration have mostly resulted in the good or at least what he shared in his presentation. But with the line so fragile between what is I and what is we online, can we trust that this kind of open environment will remain for the good? According to Kyle it will, “We start by putting that 20% out there and the rest of the people complete the picture much like a Japanese teahouse.”

Michelle Caers (@mcaers) is the founder of DesignedUX, a user experience design firm in Toronto. She is a frequent speaker at technology, customer experience and education conferences and advises a number of start-ups on customer acquisition and product strategy. Linkedin