Get to know Macy Kuang 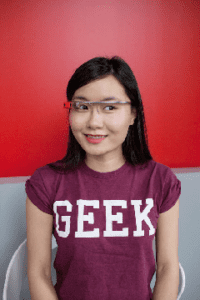 Macy Kuang is an independent game developer who has worked on titles such as Modern Combat, Asphalt and Fashion Icon while at GameLoft. In addition to programming, Macy is on the organizing committee for AndroidTO, the annual Android conference, and a regular contributor to the Google Developer Group, Toronto. Macy participated in the Google Glass Foundry in New York in February 2013 and is now a Google Glass Pioneer, working with developer versions of the hardware and associated APIs.

1. From Unity 3D to C++ to Android, you’ve been building games and apps for quite sometime. Can you tell us how your career began?

I have been fortunate to be faced with different challenges at every role I have taken. During my studies in Digital Media at Seneca College, I had an opportunity to take part in my first internship, where I worked as a Flash Developer at Oddly Studios in Downtown Toronto. I really enjoyed the challenges involved, and that helped me consider becoming a programmer for a living.

I fell in love with gaming after I started working as a game programmer at Webkinz, a platform of Flash games aimed toward kids. While I was there, I had the opportunity to spend some time working with Unity when I transitioned to their Unity team to put together more advanced 3D games.

From a career standpoint, I also found it important to stay active independently. I code everyday, and I am always trying to make new things. When Android first came out, I really wanted a customized live wallpaper for myself, so I made my first mobile app, Dots Live Wallpaper and released it on Google Market (Google Play Store). I even spent some time trying to market it, contacting bloggers to review my app. Today, Dots Live Wallpaper has over 6000 downloads with a 4 star review. There are so many possibilities and things to do it is easy to stay motivated.

2. You are also an instructor. How do you like sharing your knowledge with others?

I really like to share what I know with others because I have learned so much from people and I want to give it back. That’s why I really love the technology community, we learn from each other and it allows an individual to develop new skills quickly.

I am very interested in sharing my knowledge in a larger scale to help more people. Recently, I had an opportunity to start a relationship with the Programmers magazines in China. I have published two articles with them so far, and would love to share my knowledge all over the world if I can.

3. You’re a Google Glass Pioneer now, can you explain that?

Everybody making apps for Google Glass are Pioneers.

4. There is some negative press over Google Glass because of privacy concerns, yet it’s technological impact is hard to dismiss. How do you see Glass affecting our world in a positive way?

Google Glass gets a lot of attention, however, I think it will soon fade away and people will adapt to it.

After using Google Glass for a while, I have recognized the significance of the device as a productivity tool. When I am on my bike, I can receive phone calls and send messages with minimal difficulty or interruption, and manage my inbox while I am walking.

With more and more apps emerging for this device, I can’t wait until the day that I can go rock climbing and do programming at the same time.

It is really easy to develop for Google Glass.

Some friends of mine have made apps for it within hours. When I was participating at Google Glass Foundry, within two days, there were tons of apps being finished there.

And to make it even easier, Google soon will be releasing a native Google Glass Development Kit to allow developers to port their Android Apps onto Google Glass.

6. Now we are curious.. do you wear your Glass throughout the day?

I don’t wear Google Glass throughout the day especially when I am in front of my computers.

Google actually suggests that for beginner users, to only wear the device for around two hours a day.

I can see it takes time to get accustomed to the device, especially for people who don't wear glasses.

I wear my Glass when I am commuting or doing outdoor activities.

Thanks for taking the time to chat with us, Macy!

Catch Macy's presenting There is Something in my Eye: Google Glass Development and Design at Spotlight: Hardware on June 8, 2013. Follow her on Twitter and Google Plus.