Get to know Johnny Cupcakes 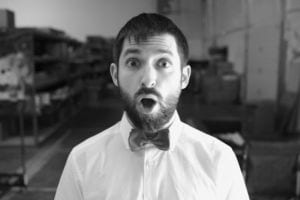 NXNEi Presentation: How to Start and Grow a Unique Idea/Passion/Biz with Little to No Startup Money

1. Johnny started printing t-shirts as part of his gig with metalcore band On Broken Wings. His cupcake-based designs also flew out of the trunk of his Camry, and he eventually left band for brand, and built a clothing empire.

2. Johnny was just 19 when he started Johnny Cupcakes, now one of the most recognized independent t-shirt brands in the world with 5 flagship faux-bakery shops and an extensive online store.

3. Johnny Cupcake stores are designed to look like bakeries, which often fools customers. To make sure his L.A. store stood out, Johnny enlisted the help of engineers that also had Disneyland and Universal Studios on their roster.

2. Business Johnny – Johnny Cupcakes Interview How to start a business and more

Why you can’t miss Johnny:

Johnny Earle is known for his practical development of independent business ideas. Plus, there’s always hope he’ll bust out his old act, inspired by NXNE.