Get to know Christopher Lewis 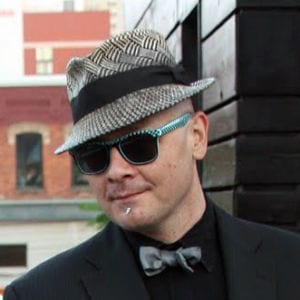 Christopher Lewis is a Toronto-based creative technologist, photographer and interactive developer with SplitElement Inc. He explores the potential of technology through digital installations and as a member of the technology/art collective the Creative Technologists of Toronto. Christopher believes that the DIY community is essential to driving the development of essential mainstream technologies by making interactive hardware inexpensive and ubiquitous. His goal is to create approachable technology that is fun to use.

1. Christopher, can you explain for us please what a Creative Technologist is, and how is it that you became one?

A creative technologist (CT) is someone who is extremely informed about emerging and underutilized technologies. They brainstorm, work within strategy (or help identify strategy) and contribute creatively through ideation, but they also get their hands dirty in prototyping and building things. My focus is bringing digitally-driven experiences off the screen in order to make new interactive installations. 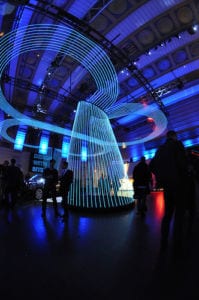 I think having a functional understanding and being able to dive into a number of disciplines is essential to being a good creative technologist. For example, I'm able to solder or sew if needed. I've worked on an opera, co-designed a fashion collection, built touch interfaces, and worked with motion sensing cameras. Experience goes a long way in understanding what's possible and avoiding the high risk that comes from “bleeding edge” technology. My work at SplitElement Inc. really utilizes diverse knowledge. A recent installation we did at DX in Toronto for Mini Canada (with the agency Anomaly) required knowledge of El-wire, hardware, programming and UX. Making many kilometers of El-wire interactive was an exceptional and amazing experience.

A big part of what makes being a CT fun is serendipitous discovery – those moments when you're able to match (and misuse) a seemingly unrelated technology to a great idea.

I've never been too fond of the separation of design and technology, and the various professional titles I've held are probably what contributed most to my becoming a CT. At various times I've been a creative director and technical product manager - allowing me to develop a strong understanding of strategy - a front-end and Flash developer, where I learned about the rigour of making things, and a college-level professor, where I taught and became extremely familiar with most aspects of digital production.

2. Tell us about Creative Technologists of Toronto.

The Creative Technologists of Toronto is an open group for people who are interested in making things. The group was formed so that we could explore creativity and technology by “doing” and stop using the excuse that we don't have time.

We get together weekly to explore technology and art and work on projects in two-month cycles. We identify a holiday or event that we'd like to target and randomly select three technologies from group member suggestions. We then brainstorm on an installation that is a mashup of the technologies with the event. We learn and educate each other while building the installation. It's an opportunity for us to foster serendipitous discovery, but also solve problems that could be intimidating if we operated as individuals.

We all take what we want from the group. I believe that for about $40 I could MacGyver a hands free computer interface using a straw and an arduino. Sprinkle in tons of rigour and that's a pretty empowering thing.

Our last project was for Pi Day – it was called Pi Fighter 2. We built a mind-controlled video game and a couple of pie guns that would throw pies in people's faces. We had a party at The Handlebar here in Toronto and encouraged people to play the game. Approximately 36 people used their brainwaves to control a character on the screen – probably for the first time in their lives. It's my hope that we planted a seed in everyone's mind that evening – that it's possible and feasible to control things with your brainwaves. If everyone who attended that night believes that to be true, then maybe they can be the ones to create the next great mind-controlled ui. That's what the group is about.

3. Can you share a little info about CTT’s current project and the hardware being used?

Our current project is inspired by NXNE, a large music and arts festival. We're building a giant Etch A Sketch that's controlled using turntables. The technologies we chose were “vinyl,” “android tablet” and “circuit bending”; we're trying to work all three of those in and getting close.

We're taking an off-the-shelf Parrot AR.Drone quadcopter, putting a high powered UV laser on it and creating a giant 10'x7' glow in the dark wall. As the quadcopter flies the laser hits the wall and leaves an amazing light streak. The two turntables are analogous to the knobs on the Etch A Sketch – one controls the X-axis and the other controls the Y. There's a lot going on behind the scenes: MIDI, node.js, special hardware and a lot of hacking. Here's an early demo of the principle.

We're currently debating whether or not to introduce this as a public event or a one-time installation. Lasers are pretty awesome, but maybe too awesome for the general public. We'll see.

Earlier this year, André Cassagnes passed away – he invented the Etch A Sketch, which I think is one of the greatest inventions/toys of all time, so the whole thing is a bit of a tribute to him.

4. Why do you feel so strongly about the DIY community?

The term Do It Yourself perfectly expresses the sentiment: “That doesn't exist? Fine, I'll Do It Myself”. There's a certain boldness there, but it's also a responsible choice; we can contribute to our own development.

I think that the distinction between amateur and professional is valid to production quality, but not in evaluating the viability of an idea. Makers or DIYers are often polymaths or jacks of all trades. There is an obvious negative connotation to that (“jack of all trades, master of none”), but I think it's BS. I think DIYers are people who aren't intimidated by the idea that someone needs to be a professional to contribute to a field of study, and that probably says a lot about the counter-cultural slant that comes from the DIY side. Makers help reintroduce the idea that we're stronger and better by understanding more about how the world works. For example, here's a man who made his own prosthetic finger.

Good ideas come from anyone. I think the DIY community drives a lot of human technological development, like Drones or 3D Printers. That's definitely the case for a lot of electronic technology development; a lot came from hobbyists.

5. This is your first speaking engagement with FITC, but not your first involvement with us. Can you tell our readers about your installation at FITC Toronto?

Through SplitElement Inc., I created an informational/social wall for the FITC 2013 lobby at The Hilton in Toronto. The wall displayed live social media including tweets, Flickr and Instagram images, and conference information such as a live presentation schedule. The whole thing was done with Away3D, which I really love working with, to create a kind of Rubik's Cube. I don't think anyone caught on, but it was fun to dope the flickr image stream by posting pictures of my lunch, face, etc. 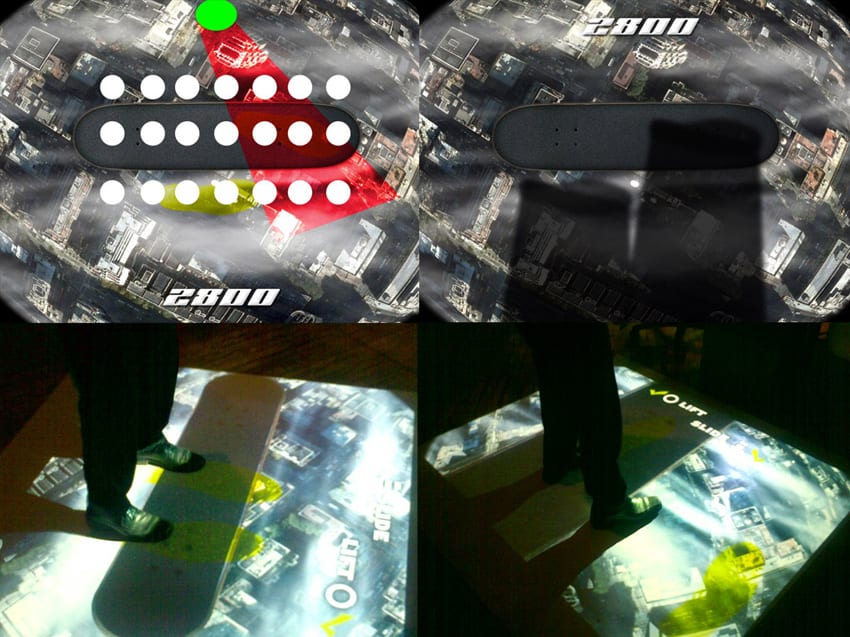 The first installation I did with FITC was called SkyRide in 2010. It was a projection of a flying skateboard that you stood on, inspired by the hover board from Back to the Future II. Swiping your foot front to back would make you travel forward. Swiping left to right in various different ways would perform tricks. I was secretly hoping to make people motion sick, but mostly they just kind of stumbled or fell when the map they were standing on started moving. It was developed with David Fasullo.

6. Your presentation for Spotlight: Hardware is titled “Beyond the Mouse” – what is that about, and what will you be demoing?

I'm going to be demoing a few different ways to get off the screen and into the real world. I want to let people know how to get started, and to me that starts with hacking a mouse. It's easier than an arduino and effective – there's nothing particular ingenious about the approach, but it's saved my butt on many occasions and it's the quickest way to get magical results.

Additionally, I'm going to be discussing a few different ways to make real-world objects interactive in order to get impressive results on and off the screen. It takes minutes to get buttons, voice or other sensors working – it takes days or weeks to get all the other layers working together. If you're able to tie those sensors into online services, such as video playback or hit counting, I think you can do some pretty amazing things with little effort.

7. Lastly, if someone came to you and asked you where they should start in this industry, what would you tell them?

Without blowing too much smoke, I sincerely think that coming to Spotlight: Hardware is a really great start. I think meeting people and being informed about the state of technology is probably the most helpful thing anyone can do to get in the industry. I attribute a lot of the opportunities I've had to events like FITC and Spotlight: Hardware. Also, come out to a Creative Technologists of Toronto event, buy an arduino and hack a mouse.