As Head of Design at Genesys, Leon has been building a world class UX design team, as well as leading efforts in the design of cloud based SaaS applications for mobile / tablet and web / desktop with focus on data visualization and customer care, garnering him and his team the 2013 CTO Engineering Award for excellence in design.

Prior to Genesys, Leon worked at BlackBerry where he was part of the Interaction design team, leading efforts on the UX design of the peer to peer and social media apps such as BBM 5.0, SMS and Facebook for BlackBerry, as well as many other areas of the software ecosystem from 4.2, BB7 and PlayBook.

Leon is also an internationally published artist and illustrator and has been featured in art and design books by Die Gestalten Verlag, ‘Semi Permanent’ and the very influential book about hand drawn typography ‘Hand Job: A Catalogue of Type’, curated by Michael Perry. He was also part of the RIP Curl Australia artist series ‘Boardshorts Travelling Art Show’. 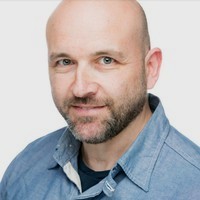