Jonathan is a mechanical engineer with lifelong curiosity around the relationship between humans and machines. His education began with plasticine and LEGO but culminated in a degree in mechanical engineering from UBC in 1999. His creative and  technical practice has included hosting a Discovery TV series, ceramic sculpture, marine hydraulics, martial arts, fuel cells, mountain biking, and biomedical research leading to several patents in the field of neurovascular implants.

He is a founding director of the eatART Foundation, an educational art research laboratory with a 10 year history of deploying large scale, technically sophisticated interactive art works to explore our relationship with technology. His first large scale, human piloted machine was the Mondo Spider, a 750kg mechanical spider which has lead to exhibitions and lectures at the University of Texas, ETH Zurich, UBC, USA Science & Engineering Festival and Bal Robotov in Moscow.

His current project is Prosthesis, a 3800kg, two story tall, human piloted, off-road racing mech. He co-founded Furrion Exo-Bioincs around this project, with the goal of creating an international mech racing league. The competing mechs will be 100% human controlled in celebration of the importance of human skill and the pursuit of physical mastery in a world where increasing automation threatens to undermine this essential human experience. 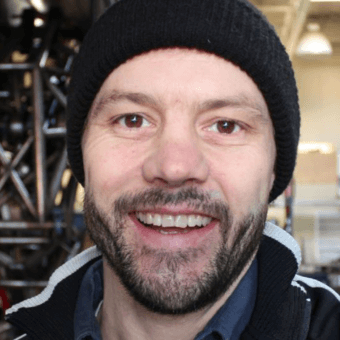