June 8, 2013 2013-06-08 00:00:00 2013-06-09 00:00:00 America/Toronto Spotlight: Hardware The physical world and the digital world will soon be indistinguishable. The demand for bringing digital interactive experiences into something tangible continues to grow and that is in great part due to the accessible technology emerging which can support such a thing. 3D printing and micro-controllers mean… Toronto FITC Toronto

Eric Boyd is the founder of Sensebridge, an electronic jewelry company. Born and raised in Ontario Canada on a small chicken farm, Eric went to Queens University for engineering; graduating in 2003 but not before co-founding StumbleUpon.com. After graduating he lived and worked in Silicon Valley at a high tech startup, designing and installing industrial sensors. Eric is currently based in Toronto Canada, where he is President of Hacklab.to, a technology community space and a trustee of the Awesome Foundation. At Sensebridge, Eric works on a variety of devices which are intended to augment the user, turning them into cyborgs. These devices include North Paw – a compass anklet that gives users a sense of direction; and Heart Spark – a heart-beat flashing pendant which broadcasts the wearers emotions. A man of diverse interests, his other hobbies include Quantified Self, DIYbio and Guerrilla Gardening.

Eric is also a Founder and Director of Festival Programming at Maker Festival, an annual event celebrating the DIY spirit in Toronto. 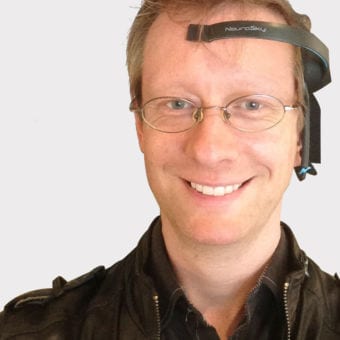 Gamify Your Life – My Epic Quest of Awesome