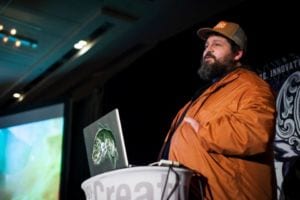 To hear Aaron Draplin speak is to admire and love the guy. Last year, Aaron’s talks included The DDC 20-Point Plan To Wreck Yer Life and Tall Tales From a Large Man and, as anyone who went can attest, they were wildly funny as well as insightful – proof that his personality far exceeds his waist size.

This time around, Aaron’s talk was titled Things That Don’t Have a Thing to Do With Things and that’s an apt title. In this talk, he uses the stage as a soapbox to get things off his chest – 51 categories of things that inspire, infuriate and enlighten. Here are some highlights:

Legal things: Just to make sure, he may offend some people so he starts his talk with a small disclaimer.

Sharp things: always cut away from yourself.

Creepy things: he hates using the color purple. It’s the color of royalty so stay away from using it unless you need to.

Things on the ground: Sometimes things that are thrown away or fall on the ground are things which have great design and aren’t appreciated. He uses examples, such as the little notebooks and design on trash, much of which he collects.

Magical things: He used the song “Gingerale Afternoon” by his favorite band, The Flaming Lips, to show a montage of his work. He then reflected on his good fortune to be able to make money doing something he loves and something that has enriched his life for twenty years.

Financial things: Aaron owns his house, car and he takes care of his family with the money he’s made from his design work. It’s important to get free from debt so that you aren’t constrained to what you have to do – you get to do what you want to do, whether it’s for money or not.

Stickery and forgotten things: He is a collector of stickers and decals and he appreciates the processes it took to make it. Those things are artifacts of a different time. If you don’t preserve them, they’ll probably disappear. It’s great that technology is having an impact and expanding toolsets, but it’s important to look back at the stuff that was made with fewer tools - some of it is incredible. With the things that he’s found and saved, he is hoping to publish a book.

Influential things: LEGO. As a child, his family couldn’t afford very much, but one Christmas he received a LEGO set and it had a profound influence on him and his work.

Cosmic things: When his nephew was born, it changed his perspective on the importance of life from a cosmic scale. It’s something that he urges people to not forget about because the small things that weigh us down are ultimately unimportant.

Skateboarding things: This is where he cut his teeth. He experimented and created his first projects for skateboard companies.

Papery things: He created “Field Notes”, which are notebooks he developed and designed. It started off as a small project but became a success.

Surreal things: he was able to draw a crowd of 200 people for one of his talks in Omaha, which he considers surreal because Omaha has such a small population.

Long things: his pet Dachshund “Gary” that, unfortunately passed away after suffering from a back injury, was a great companion.

Funny things: Don Rickles is an American treasure. Google his work and you’ll have a good time.

And finally, overrated things: He doesn’t like stacked foods.

Aaron thanked the audience and was nice enough to take some questions after his presentation. His main driving point is to do what you love to do and to not complain about doing it - do it for free when you have the opportunity. For anyone who has done manual labor or done something they didn’t want to do at some point, it should be a thrill to do creative work; for this reason, he doesn’t believe in “writer’s block.” Don’t complain about clients because this is your chance to do what you love, so enjoy it and keep at it.