The Cool S**T hour at FITC!

FITC's "Cool Shit" is such a great yet simple idea for a session, which is have some of the best in the Flash industry show off some of the cool shit they are working on. No big presentation, with a lot of slides, just 10 minutes to give people a preview of some cool shit they are working on. This was originally done at this year at FITC Amsterdam and judging by the positive reaction of the crowd in Toronto, I wouldn't be surprised if it was brought back again next year.

Balázs Serényi
He demoed some node-based programming with SourceBinder.org to create a small Flash game in just a couple of minutes. Within his 10 minute time limit he got a PaperVision3D version of pong, with a physic engine, twitter image streaming in, while using movement from the web cam as controls for the game, getting the audience to wave frantically. Yes, this sounds completely INSANE, but I'm not making this up (there were several hundred other witnesses), so go check out or read up about SourceBinder.org when you get the chance. 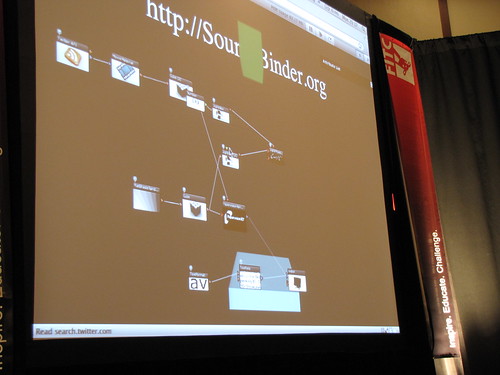 Koen De Weggheleire
His cool shit was various PixelBender-like effects using just pure ActionScript and his webcam. Ended off with a strange kalidascope from the webcam, then he added music and pretended to sing like some bizarre music video. This might not be making sense, but trust me, this was once again some cool shit. 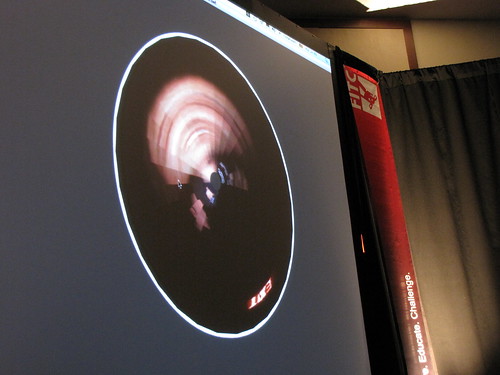 Ralph Hauwert
Showed some experiments for Papervision3DX, the new version of the 3D engine made specifically for Flash Player 10. One particular cool example was a Flash version of Quake, called PaperQuake running at an incredible smooth framerate. It's some really mind-blowing stuff in where they are taking the 3D engine and the Flash community is lucky to have so many talented people working on such a great open source project. 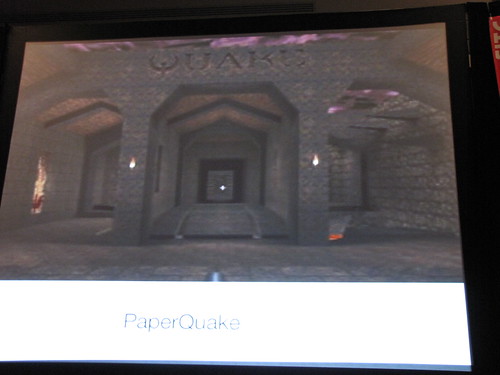 Mario Klingemann
Put together an example of the Flash based application called Peacock, where you can create cool and bizarre images and patterns by hooking up different images and filters. Peacock is a cool application that many have seen before, but what Mario was doing in particular was trying to show how any image can be made to look like a Van Gogh painting. Unfortunately it didn't work out the way that Mario wanted, with some unknown settings off, but while the final image may have not been Van Gogh-ish, it still looked pretty incredible. 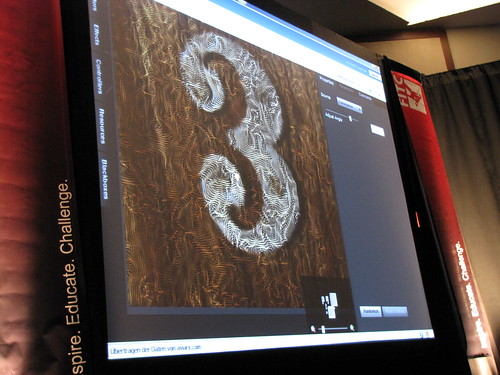 Dr. Woohoo
He showed a cool example where he made some vector animation of drifting pollen via OpenFrameworks. Which was nice and cool, but people's jaws literally dropped open when he showed that he wasn't animating in Flash but was instead animating inside of Illustrator! ILLUSTRATOR!! Once again some really cool shit that just blew people away. He also created a strange and beautiful abstract image in Maya by manipulating a sphere with music, once again using OpenFrameworks. 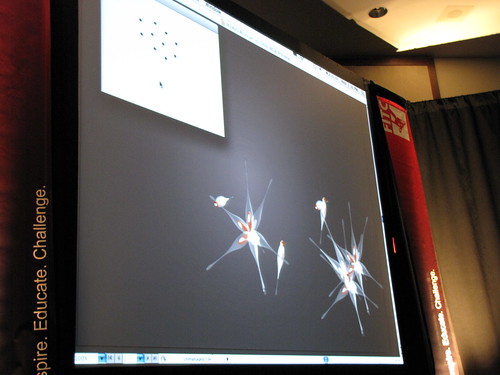 If FITC bring this format to other FITC's or FITC Toronto again, be sure to check it out for some really incredible cool shit.