Sara Blake, also known as ZSO, is a New York City based illustrator and designer and also happens to be one of the headlining speakers at FITC Toronto. ZSO’s hands are her preferred artistic tool, she is an artist who embraces the art of improvisation and takes chances, she routinely makes mistakes and chooses to grow and learn from process, and most importantly – she understands the value of having more women represented at industry events like FITC Toronto.

That is why she decided to take some time out of her busy schedule to sit down with us to talk about her past, her experience in the industry, and how she feels being a woman in a mostly male-dominated industry.

First and foremost, let’s get to know a little bit more about you. Where did your fascination and curiosity with illustration and design start?

I’m not completely sure about the answer to that one, but I guess it was something I was born with — but the ultimate irony, is that I was also born with pretty big vision problems. I think as a kid that gives you a built in awareness that visual things were important. I had eye surgeries twice when I was really young to correct a lazy eye that to this day still doesn’t really work and I’ve always had pretty severe vision problems. In pre-school, I wore a giant eye patch over my good eye to try and strengthen the bad one, which needless to say didn’t make it very easy to make friends. I think my parents sensed that pretty quickly so I think they really encouraged me to do other non-social activities that made me feel good about myself. They were extremely supportive of their little weirdo child. I owe a lot to my mom and dad. I was also a bit of a tom-boy, outdoorsy sort of kid, so I also had a fascination with nature very early on. All my earliest kid drawings are of African animals I found in my dad’s collection of National Geographic and weird leaves and stuff I found in the backyard. So I suppose the answer to that is a nature-nurture combo.

To some, you are Sara Blake. To others, you are known as the creative powerhouse ZSO. Would you consider these to be two separate entities, two separate personalities?

They’re both all me. They are pretty inseparable at this point. Early on I sort of lost control over which one people chose to identify me by. I respond to either, but personally I think I prefer ZSO. It’s about 8 years old now. I originally created it to try to add some anonymity to my work—I just wanted people to see my work, not see me. I didn’t want people to know if I was male or female. I wanted to be completely invisible, and creating a moniker seemed like the simplest way to do that. Over the years though, that’s really disintegrated. Through random emails I get, conferences, and becoming friends with other creators, now I think I’ve actually found that bringing myself forward and connecting with people one on one is the best way to share and talk about creating.

You often speak out about the importance of making mistakes and the value of learning from process. Can you tell us a little more about your philosophy on these two ideas?

I think one the most important things (and maybe the biggest secret) I’ve learned is no one really know what the heck they are doing. I mean seriously! In any field! I think everyone just figures it out as they go along. The ones who excel are usually the ones who aren’t afraid of doing things “wrong” because they never knew the “right” way in the first place. Fear of failure is really crippling, so you either have to not care or just not know any better. That’s also a big reason why I like to leave room for failure in my work. I try to do about 75% more personal work so that I don’t have to worry about disappointing anyone and meeting any sort of expectations. It’s seemed to work so far. Every commercial job I’ve ever gotten has been through personal work.

In the technology and design sectors of the industry, men often outnumber women. We know there are plenty of tech-savvy and creative women doing amazing things out there, but why do you believe women are so under represented at events like FITC Toronto?

I think you are right, there are still plenty of women doing awesome, creative things, but overall, I still think the ratio of women to men is still much smaller. When I look at just my group of friends striking out on their own in creative fields, I really only know about 2 or 3 other women. The rest are guys. In my experience, both behind the scenes as well as at big events, there are just always more dudes. I’ve gotten used to be either the only female or one of a very small minority. To be honest, I can’t really can’t answer the “why” part of that question. I just know I’m excited to see more women up on stage at FITC and beyond.

And why do you feel it is so important for more women to be accurately represented at events like FITC Toronto?

The more women you have up on stage, the more the perception of this industry as male dominated will dissipate. It can be pretty intimidating I suppose. And even I prefer to be more behind the scenes. It’s tough for anyone to get up on stage and talk in front of a lot of people, especially when by nature your job has you working quietly and alone for most of the day. It can also be really empowering being a girl and having your voice heard by a predominantly male lineup. To be honest, it’s really baffling why there aren’t more women around, but I’ve found it to be the case everywhere. I don’t think we live in an age where women are scared and they are certainly not incompetent. I do think things are slowly changing and conferences like this one and not only inviting female speakers, but conferences are getting more interdisciplinary as well and cross pollinating tech with art, art with tech.

As a featured speaker at the upcoming FITC Toronto, what are you most excited about? Can you give us a bit of a teaser as to what we can expect from your presentation?

Lot’s of behind the scenes photos and process shots. I’ve always thought that the only thing more interesting than the final product (whether it’s a piece of art, a film, or music, etc.) is the “making-of.” I’ll have work-in-progress shots, time-lapse video, and talk a little about my workspace and what it’s like to work in a very small space. If I’m allowed by the time FITC rolls around, I’ll also be showing some new work I haven’t been able to share anywhere yet.

And, just because we’re all dying to know – what’s the next big creative project on your agenda? Can you reveal any small details (a teaser perhaps) to us?

I’ll be working on some more textile products which I’m pretty excited about. When you print on fabric, the illustrations take on a whole new life because you incorporate a 3D space, movement, and the texture of the fabric itself. I’ll also be printing much larger and there has been some talk of printing on metals. In general though I’m trying to keep this year fairly open. I’ve had a packed past year, so I’m really looking forward to the freedom to improvise with project content a little more.
---

It sounds as if Sara Blake (AKA ZSO) currently has a lot on her plate, but is somehow managing to keep everything balanced and in check – what an inspiration! We will be keeping our eyes locked to http://hellozso.com/ for new projects and updates, and so should you! 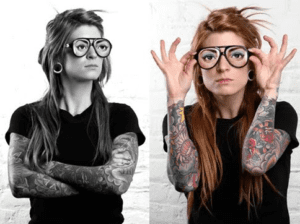