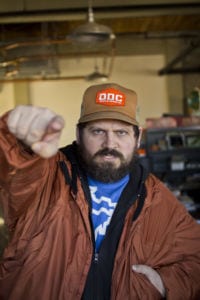 Born and raised in the Midwest, Draplin grew up on Legos, Star Wars, family trips, stitches, fall foliage, drawing, skateboarding and snowboarding. His career first started when he designed a snowboard graphic for Solid snowboards and from there, his career took off like wildfire. Draplin found himself lettering cafe signs, drawing up logos and dreaming up advertising campaigns, and now he's got his own company to show for it – Draplin Design Co.

The Draplin Design Co. first got its start in the fall of 2004. Some of his most esteemed clients are: Coal Headwear, the Union Binding Company, Snowboard Magazine, Field Notes memo books, Ride Snowboards, Forum Snowboards, Grenade Gloves, Chunklet Magazine, Cobra Dogs, Absinthe Films, NemoDesign, Gnu Snowboards, Esquire, Lego, Sasquatch Music Festival, Burton Snowboards, Richmond Fontaine, Incase, K2 Snowboards, Bonfire Snowboarding Apparel, Ford Motor Company, Adobe and the Obama administration, if you can believe that!
Recently, we had a chance to ask Draplin a few questions, and he was completely open and willing to the idea. Check out our interview with Draplin as he discusses his experience in the industry, some of his most recent projects, as well as a little sneak peek of what we might be able to expect from him at FITC Toronto and in the near future!

1) First and foremost, should we be referring to you as Draplin? Or as Aaron? What do you prefer?

2) Alright, Aaron - now that we've got that head scratcher out of the way, could you tell us a bit more about yourself and your background? How exactly did you find yourself getting started in the business and where did the interest in Design come from?

I'm from Michigan! The same dirt, trees and water here in Toronto! Growing up, we were outside a lot, ripping around the neighborhood, exploring the outer reaches of our little town. Lots of adventures.

When I was 19, we got the chance to go west, and I make the very most of it. It wasn't about a career. It was about adventure again. And, knowing you had to strike when the iron was hot. After a number of years snowboarding out west, I shifted my focus to art  and design. And with the same ferocity, I dug in. But here's the important part: It wasn't about getting some job. It wasn't about choosing a career. It was about learning new ways to communicate, make stuff, develop a logo, etc. Like, a hobby or something? It was so fun. The work stuff came later. I'm so thankful it was from that angle, as, this stuff will always be fun to me.

3) So, if you look back on your past (growing up), did you always see yourself as a designer, or did you dream of doing something completely different?

I always knew I wanted to do something creative. Since I was a squirt, I've been drawing, playing Legos, building forts, etc. Stuff with my hands. Stuff where you take simple things and build something a little more complex out of them.

For instance, I still look at homebuilders with envy. That seems like such a cool job. We all need homes, and what an incredible opportunity to make a place that inspires people to love their lives, you know?

Someday, I'm going to build myself a house, and it's going to kick butt. I can't wait.
When design came into view as possible direction for myself, I remember it feeling very pragmatic. Like, the idea that the world would always need newspaper, want ads and manuals made, you know? Even that stuff seemed cool to me. Still does.

4) As one of our featured speakers at FITC's largest, 3-day conference on home soil in Toronto, what would you say you are most excited about?

Hitting those record shops on Queen Anne street! Just a couple blocks away! Ha!
For the conference, it's the idea that I'll discover something new each time I sit down for a talk. I don't know a lot of the people on the circuit, so it's all a surprise to me. Like, that Jared guy last year who make the robots and flaming devices? That was awesome and he seemed cool as shit. I look forward to seeing more of that sort of weirdness and wildness.And Adobe, if you are reading this, you guys better step yer game up some. Last year was a big commercial. Give us something more! I was expecting to hear some juicy behind-the-scenes stuff from my favorite software company. Instead it was a couple slick slides and talking points. I expect more from those guys this time around! Come on, dazzle us!

5) Would you be able to give our attendees a little 'elevator pitch' sneak peek at your presentation 'Things That Don't Have A Thing To Do With Things' at FITC Toronto 2013? Why should they come out to see you?

It's a reaction to talks trying to be a little too smart. Like, making things connect a little too hard, to bolster bigger ideas. And frankly, sometimes it's a stretch, and ultimately, predictable and flat out boring. For my talk, I plan on offering a up a list of things that are completely unrelated, and then riffing on what I love or hate about them. It's the stuff I forget to tell people about, or, the sort of stuff I see frustrating patterns of. Details, nuggets, small stuff, big stuff, forgotten stuff. Stuff I love, hate, wonder about or fear. Will it all connect? I have no idea. Roll the dice on the DDC!

6) To pull more from the last question, what do you think it is about your presentation and your style that sets you apart from other presenters? Could you tell us a little more about your 'brand of dumb'?

Out comes the dirty laundry, eh? What sets me apart from other presenters? Damn, a tough one. I'd like to think it's my ability to not take myself too seriously, and, the idea that I'll say exactly how I feel about something. I'll let it fly up there. And that might be career suicide, you know? Like, a "dumb" way to do it. But hell, it's the only way I know. FITC, I promise you, no limp dick "I haven't had my coffee yet..." jokes, overly dramatic pauses or trumped up assertions. I can assure you this much. I don't drink coffee.

7) One final question, Aaron – would you mind giving our attendees an inside scoop at what is going on in the world of Draplin Design Co. these days? We are pumped to hear about what you've been up to!

- Developing Field Notes summer offerings
- A logo for a up-n-coming cast iron killet company
- The graphics for the 2013 Sasquatch Festival in George, Washington
- A headwear brand dedicated to making "bad hats" made in the USA
- Speaking gigs all the way up into June
- Scheming up a big-ass summer road trip with my gal Leigh
- Booking tour dates for the fall! Just confirmed Hawaii!
- New binding designs for the Union Binding Company
- A spring product catalog for Coal Headwear
- Attending my asshole buddy Evan's wedding in New Hampshire
- Seeing my parents this summer as much as possible
- Album design for the new Casey Neill record. Vinyl!
- A logo for a killer skate/snowoboard shop in Fernie, BC

All sorts of killer stuff is cooking up on the DDC factory floor - hell yeah! See you at FITC!