Searching for Lost Monsters in the Ugly Room 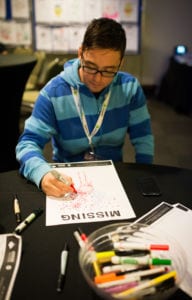 The Ugly Room, inspired by Myron Campbell (@notsosimpleton) a Vancouver animator/artist/designer/ illustrator, and sponsored by the Vancouver Film School, gave FITC attendees a place to unleash their creativity visually, just for fun. Blank “lost” and “missing” posters were stacked on the tables, along with markers and coloured pencils and the requisite creativity-fuelling sugar fix and visitors were invited to draw a monster on their poster. The chance to win a ticket to next year’s FITC by tweeting your monster added incentive for those who might have been a bit reluctant to give it a whirl.

Campbell described the monsters as your imaginary friend from childhood that’s been lost over the years. In the course of doing workshops about creativity he has observed that most children naturally pick up art materials and draw when given the chance, while most adults don’t. The Ugly Room is in part Campbell’s invitation to adults to recapture that childlike creative expression. 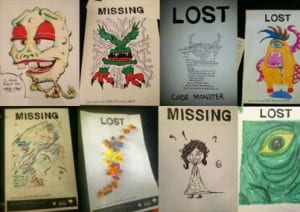 By Day 2 of the festival, the walls of the Ugly Room were covered in all sorts of monster pictures. Some were simple stick figures, others elaborate illustrations that would be at home on the pages of a graphic novel. Some scary, others sweet and fun like Disney creations. Most used the markers and pencils but at least one person used the candy to make a picture.

Most of those I talked to while they were drawing expressed a common theme that for them, drawing – whether doodling or illustrating – was a way to relax and let creative ideas come to them. One of the participants, freelance graphic designer Kathyrun Tamdulska, encouraged drawing as a means to see yourself in a different way. Whatever their motivation, FITC attendees took full advantage of the Ugly Room and unleashed a fantastic array of monsters. You can check out more of them on Twitter by searching for #FITCLostMonster.