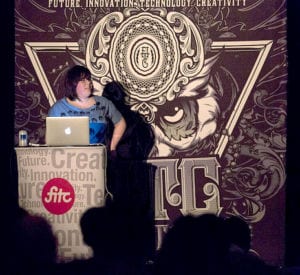 Stacey Mulcahy (@bitchwhocodes), a Lead Dev at Big Spaceship, came to FITC Toronto with a visual collage of sometimes crazy, hilarious and WTF inducing animated GIF’s. For her second talk of the day Herding Cats 101, Stacey dove right into the magic and misery that takes place when herding cats or managing teams.

When people think of a process they think of planning, design, development and launch. Stacey found that clients just want to know how you work. The “how” almost acts as a safety blanket for them, providing reassurance when, internally at its best, is controlled chaos, and at its worst, just chaos.

Working in teams require that you take care of each other, she says that “you don’t have to like them, but you do have to love them.” When you separate developers from designers and the strategy folks, that’s a mistake.

“You never want to work with a developer who doesn’t want to have input.” The quickest way to fail is to put people into a corner, you want them to be engaged from beginning to end so their feedback is used to improve the project throughout it.

Competition on a team shouldn’t exist, it poisons the well. It prevents a team from really working together and leads to only seeing the “I” not the “we” of what the team is. Don’t hire assholes because you’ll spend more time dealing with them than on the project itself.

She wants you to avoid douchebaggery, in her words it means talking in plain English and not using big words in internal communication. Buzzwords are bad and not necessary internally. They can often obscure meaning instead of enhancing it. Don’t talk to Stacey about low hanging fruit either or whatever buzzword you hear, speak so people understand, not so you look smart.

Of all parts of a project, scoping it is her most hated. That’s because she doesn’t want to play “the magic numbers game” where you keep going back and forth on what is possible, instead of being transparent and knowing where you stand from the start.

If you’re scoping out a project, make some basic assumptions of what you are going to do, and what you are not. Do your best to give clients these parameters. There are times when they’ll want a ballpark number, but that is better defined in your discovery phase of the “what” in the project.

As a maker, what Stacey found is that you can’t be meeting and making at the same time. For someone who is making, a meeting can ruin their workflow, and when you have a meeting you better be damned sure you have an agenda so you don’t waste anyone’s time.

Stacey deals with meetings by blocking off time for them and her work. It’s about having as much respect for other people’s time as they have for yours. You have to really be considerate of a maker’s schedule, so those meetings don’t become a time sink for those doing the making.

What the definition of “being done” was the next target on her epic herding cats hit list, and it has different meanings to different people on a team. Her example was that a designer isn’t done when she hands over the work, they own the visual design and should be there as it’s being developed so it matches what they intended. Defining what “done” means at the start of a project for those involved will keep the head banging to a minimum.

Have you ever done a post-mortem? Well Stacey says that they are useless. Going over what worked and what didn’t really doesn’t help since the project is done. What she does do is hold weekly reviews so that everyone is on the same page and can help when it counts instead of when the project is long gone.

Building trust and transferring skills within your team by holding workshops can help those on your team and those within the company who just want to learn. Workshops take more time, but allows everyone the chance to get involved, to learn and grow, which can only help diffuse knowledge.

Stacey’s last point of the talk was if all else fails you should dance like nobody’s watching. Remember to take your team out for (not necessarily alcoholic) drinks, bowling or whatever to build trust (and get some valuable blackmail material for later use).

For every point, emotion and thought, Stacey had dozens if not more animated GIFs at the ready. Be it an angry panda, a dancing kid, too many cute cats to count, or one more relatable if awkward moment to go along with her wealth of insight and hilarity. If there are two things beyond this amazing session itself to take away is that there is a GIF for everything, and that a presentation + GIF is that much more likely to be a win.