Recap: Mistakes, Lessons and Being Creative with Yuko Shimizu 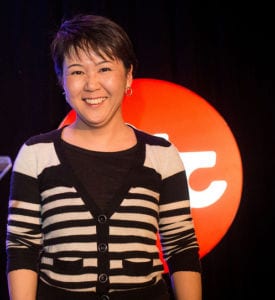 "You’ll never be younger than you are right now”, says Yuko Shimizu to the assembled crowd.  It’s a truism that we all know, but often forget.  "Don’t waste a second - follow your dream.  There is never a better time to start."

If anybody understands this it’s Yuko.  She spent 11 years working in Japanese corporate PR feeling frustrated and knowing that she wasn’t doing what she loved before moving to the United States to follow her dream of being an illustrator.  Her first mistake and, arguably her largest one, was spending so long in a job she knew wasn’t what she wanted to do to please other people.  In her case it was her family.  But she’s not bitter.

“Let me thank those who were mean to me.  I’m standing here because of you.”, she continued, showing a picture of the office building she’d worked in for more than a decade.  She doesn’t name the company, nor does she name the boss she said had made life difficult while working for the company.  Throughout the 11 years spent in PR Yuko knew what she wanted to do.  She wanted to be an illustrator. “But, nobody knows what an illustrator does”.  Most people think it is drawing cartoons for newspapers or animations or children’s books, she explains. "Now I explain what I do.  I draw pictures for newspapers and magazines.”

Still says she still gets excited about seeing somebody on the subway reading an article that has one of her illustrations.  She’s been working as an Illustrator for many years now but the thrill is still there.  “I want to tell person that I drew the picture.  But they’ll think I’m crazy”, Yuko explains.  She has also created illustrations for book covers - more so overseas than in the United States -, worked with DC Comics - including 67 covers for a comic book which has just five editions left until it ends -, and provided illustrations for DVD covers, movie posters, some clothing designs for the RED [a company that works with established consumer brands to create products to raise money for fighting AIDS in Africa] which is sold in GAP - amongst others, and murals.

How did Yuko go from an unfulfilling career working in PR in Japan to be a successful New York-based illustrator?  One day she quit her job and moved to New York to go to art college. It was something she’d always dreamed of doing.  So, one day she decided to do it.

It’s not always been a positive experience but it beats working in a job she disliked.  “Last year was rough.”  Not because she didn’t make enough money, she went on to explain and she always enjoys the subway journey to her studio - it’s her sanctuary.

She has 15 lessons [and counting?] for the audience.  I wonder whether, perhaps, she wishes somebody had shared with her at a presentation before she spent 11 years in a soul-destroying job.  But, then again, I get the impression she’s enjoyed the ride.

Lesson number 16?  Don’t waste a second – follow your dream.  What are you waiting for?

Lyndon Johnson is founder of THINK DIFFERENT [LY], a company that helps entrepreneurs build the relationships they need to grow their businesses. He wants to change the public relations industry to make it affordable, effective and accountable for early-stage businesses.

Having started his career as a broadcast journalist, he has worked with companies of all sizes to help them deliver the right message to the right audience at the right time, via the right delivery channel for more than 15 years.