Get to know Neil Mendoza 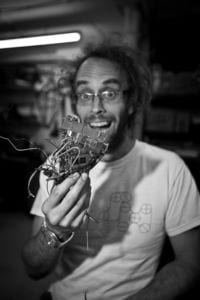 Neil is an artist and creative technologist exploring ways of breathing life into objects and spaces through the use of digital and mechanical technology. He is a founding member of the collective "is this good?". He graduated from Oxford University with a master's in maths and computer science and has worked in many fields during his career, from game development to numerical analysis.

His work has been exhibited by The Science Museum, The V&A, Watermans, PICNIC Festival, The AND Festival, ISEA, Kinetica, The Nottingham Playhouse, BBC Big Screens and The Museum of London, among others. He has also created installations and written software for a diverse range of clients including Swatch, Nuit Sonores, HTC, Ford, Audi, Orange, LCF, Nokia, Moving Brands, Wieden & Kennedy, New Angle, Arcade Studios, Poke, Doritos, Accenture, Burton Snowboards and Brother.

Neil will be presenting Breaking the Frame and is a participant on the In Conversation panel at FITC Amsterdam February 24-25, and will also be speaking at FITC Toronto April 27-29.

Thanks for taking the time to answer some questions, Neil.

The piece I’m working on at the moment is a physical data visualisation of the stock market. It’s a beautiful old wooden display case containing different types of moustaches arranged in a similar manner to a butterfly collection. Each moustache is linked to a stock price, for example the Diageo Dali, and these numbers, that people gamble incomprehensible amounts of money on every day, are used to control the movement of the moustaches. There’s also a hidden party mode for when you’re bored of trading and want to let your hair down. All the documentation for that project should be online soon.

2) Do you have any future projects lined up, and can you share them with us?

I have quite a few things on the go or lined up at the moment including some visuals systems for the CLOUDS interactive documentary, creating some robot phone butterflies that you call to generate the patterns on their wings (that are made of screens) and a permanent projection based installation for an airport. 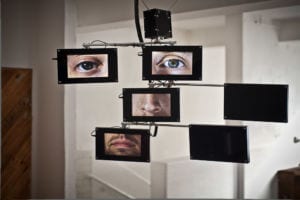 3) For those new to the industry, how do you recommend they break in?

The best thing to do is to just start making stuff and get your work out there. Dream up projects that inspire you and then make them a reality. The internet is an amazing tool that allows you to show the whole world what you’ve been up to. Even if you don’t have your own website, there are a plethora of other places to share your work from portfolio sites such as Behance and code sharing sites such as Github through to social media sites.

I’m pretty sure there’s been a Back to the Future cartoon so I’m going to go with Doctor Emmett Brown. I mean he turned a DeLorean into a time machine so pretty much self-explanatory why he is rad. His lab in Back to the Future is covered in clocks so I decided to do the same thing to my bedroom when I was a kid. Turns out it’s not actually that easy to sleep when you’re surrounded by ticking.

5) If you weren't doing what you are now, what would we find you up to?

I often ponder this as I spend most of my time playing with technology that didn’t exist 50 years ago. Scientists used to account for a lot of the world’s geek quota and I think that the difference between science and art is a lot smaller than people think. Both scientists and artists spend their time thinking about how the world works and trying to come up with creative ways of exploring that. So probably some kind of scientist playing with big fricking laser beams. There's also a distinct possibility I could have ended up as a snowboard bum, a yoga teacher or a DJ/producer.

Thanks, Neil, see you in Amsterdam and Toronto!