Get to know Mike DiGiovanni 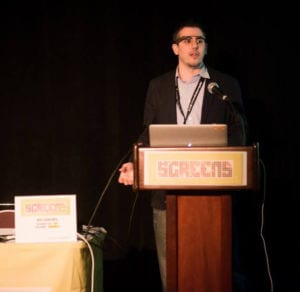 Mike DiGiovanni is an Emerging Technology Lead at Roundarch Isobar where he focuses on mobile application development and creates new applications with Google Glass, smart watches, and other wearables.

As both a developer and user, Mike has a passion for all things mobile. Being one of the first few dozen developers to get his hands on Google Glass has been a highlight of his year. He used that head-start to jump into the undocumented native development for Glass and open source his work so to help other developers going down that path.

1) Tell us about your early beginnings, how did you get your start?

I always wanted to make video games since I was a little kid. That basically led me to learn to program on my own picking up a QBasic book before I had an internet connection and working with a buddy of mine making simple games during lunch time at school in the 6th grade. That pretty much got me hooked on software development and I really knew that was something I wanted to do.

I eventually moved away from games for a few reasons, they stopped being fun when you made them and know the ins and outs. After improving my coding skills I started realizing how much of a task it was beyond just making a game to have a compelling story and create great artwork.

Coming out of high school I got an internship doing java desktop software dev. I worked there full time during summers and breaks and part time during the school year. After college, mundane development work continued and I eventually started diving into mobile work for fun. I eventually landed a job at Barnes & Noble.com working on the Nook, then found myself at Roundarch Isobar doing consulting work for Android devices and eventually migrating to wearables and other emerging technologies.

So I find myself in love with the idea of wearable computing. I totally bought into smart watches and Google Glass and don't think I've gone a day without one of those in over a year.

Most recently I've been working on a variety of Google Glass projects. Trying to come up with new use cases for the technology. I've been most interested in hands free gesture based control of Glass as a way of promoting accessibility to technology.

3) What do you think is the biggest challenge our industry faces right now?

The mobile web as a replacement for native apps. It has great potential. On the desktop we've seen so many transitions of traditional apps migrate to pure web interfaces, but I'd call most of the mobile attempts at that poor experiences.

4) Within your Industry, is there someone that inspires you?

I'm constantly inspired by my fellow Android developers. The open source community supporting Android developers with great libraries is just fantastic. Square is a company, whose developers have done great things for the Android platforms by releasing amazing libraries that solve a lot of problems.

5) Do you have any future projects lined up, and can you share them with us?

I'm going to focus on Glass development and continue down the path of trying to create experiences using Glass that will change how we interact with computers.

6) For those new to the industry, how do you recommend they break in?

Start doing exactly what you want to do as soon as humanly possible. Jumping into an internship straight out of high school has been a tremendous benefit in my career. It made college easier, and at the same time, college made my internship easier. The experience is definitely a huge benefit when it was time to find my first "real" job, both during the interview process and just feeling like I deserved to have the job I earned.

If you can find a place that you can have a mentor who is invested in your success, then that's even better.

7) Favourite cartoon character or superhero, and why?

Batman. When I was really little he was my least favorite superhero. He doesn't really have any super powers. But I've come to respect and admire that over the years. Plus I really enjoyed the last 3 Batman movies.

8) Favourite music to work to? Any specific artists?

I got hooked on classical versions of video game music. Nothing in particular, but it sure manages to relax me and help me focus.

9) If you weren't doing what you are now, what would we find you up to?

If I have any free time, I try to fill it with a good movie. Thanks to Netflix and Amazon Prime, I've switched to streaming primarily, but I still have a collection of over 2500+ DVDs and Blu-rays.

Mike, thanks for taking the time with us!

Mike presented Glass w/o Glass: Developing native Glass applications without the hardware at SCREENS 2013. You can find the slide deck of his talk here.