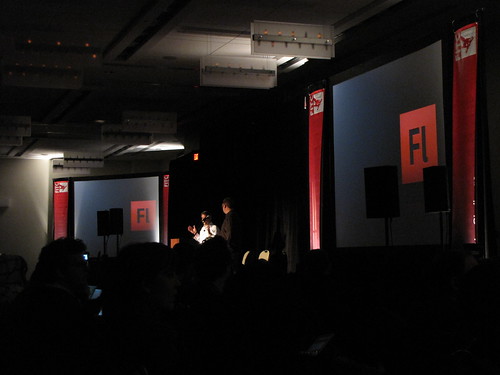 As always one of the highlights of FITC is the Adobe keynotes.

The big announcement and demo was supposed to have been an update to Flash CS4, but unfortunately it was not ready yet in time for FITC. If you are wondering why Adobe don't ever give firm product announcements, this is one of the main reasons, as unexpected problems can always pop-up last minute. However, Adobe's Richard Galvan assured the crowd that an update to Flash CS4 was just a couple of weeks away. Galvan said it would include a lot of bug fixes, improve stability and address many of the concerns that people had about Flash CS4.

There was also interesting update on the headless Flash Player that Adobe has been supplying to search engines. Developers who have created various case studies to track what Google has been picking up have noticed that results have been changing and improving as time goes on.

Well, apparently it's not just the search engines that have been refining their search techniques of Flash, but Adobe continues to improve the headless Flash Player. 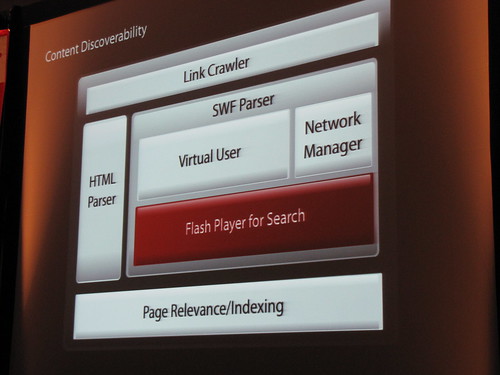 Adobe are working on network management in the headless Flash Player which will give search engine more control on viewing the files that an SWF file is loading in the Flash Player. Once this is implemented Flash should get another SEO boost, with concerning additional files.

That seemed to be all the brand new announcements from Adobe, and the rest of the presentation was focuing on recent events in the Flash world, such as Flash Player 10 reaching 74% penetration in Canada/US, getting Flash onto other tvs and top-sets and how studies show Flash continues to dominate web video.

Meanwhile here's one of the examples they showed of the new Flash Player 10 dynamic sound API, where notes are created in runtime based on stock chart data.