Thomas Joos decided to take his audience on a journey through old skool media in a new cross platform jacket, and the technical difficulties they came across doing different projects for various clients.

Thomas Joos works for Little Miss Robot and started his talk by discussing how they are a ‘mobile first’ company and how this connects with their latest client ‘Studio Brussel’. His first topic is about radio, and the innovation behind it. It turns out one of the largest Belgian radio and TV stations, the VRT, is the most innovative amongst all of them and they are attempting to revive radio to this day and age. The first step was sketching, and from here they developed a prototype on iOS. The main reason, of course, being that if you pitch to a bunch of stakeholders - they love if you have a prototype on iOS to show off.

They went all out on this prototype, created a different visual style and a unique way of listening to music via your mobile. It’s not just radio, you can actually 'see' it before you decide on what you want to listen to. They created a very funky interface, super advanced stuff - and they created very long classes of code for it. However, when a project progresses, you know it is time to refactor your code. It turns out the one crazy thing they wanted in their UI was already baked in the iOS SDK; and they replaced all their code with just one line by using the contentMode property on UIImageView. What lesson did they learn from this? RTFM.

Thomas went on about introducing node.js to their current set up and how different parts of his brain reacted to this. His ego won, of course: “How cool would it be if we can pull this off?”

Since they are a ‘mobile first’ company, they believe a website should not live longer than 3 years. The landscape of internet is changing towards hills of mobile, and you as a developer/designer should act upon it. Of course, they did this with grace (and if you want to know more about mobile first, read this book by 'A List Apart'). Their process went from native iOS application, to HTML5 responsive website, to Smart TV. Full circle coverage of all devices. Truly amazing stuff.

Next, Joos gave a sneak peek at their ‘mobile reporter’ app, where the biggest technical challenge was to handle large chunks of data in the form of video, images and text. He explained a new breed of mobile app testers; 'The Journalist'. They are as thorough as writing a piece of text, as testing a piece of software. The technical hurdle they encountered began with the client feedback. The first week everybody was like “COOOL, GREAT APP! LOVE IT”. The second week, feedback became a bit less positive and by the third week in, the client was bashing the app they created. Turns out that storing large chunks of data in a temporary folder that gets deleted every so often on the iPhone wasn’t the best solution.

They overcame this by storing data in the application folder and the client was happy again because - it just worked. 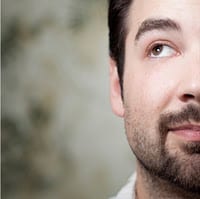