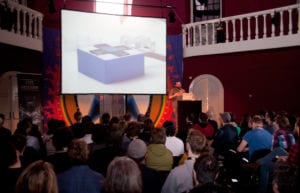 Eric Brockmeyer is an associate at Disney Research, where a team of designers, artists and scientists work together to infuse cutting edge technology into novel user experiences. Unlike  Google or Microsoft, Disney isn’t a company you’d typically associate with high-tech research. Disney isn’t in the technology business; Disney is the magic business. But since any sufficiently advanced technology is indistinguishable from magic, investing into R&D to create something unprecedented becomes critical to maintaining that magical facade.

So what does Disney Research research?

The first project Eric showcased used electronic sensors and machine learning algorithms to turn any conductive surface into a touch interface. Example surfaces included a doorknob, a pool of water, and even plants. The latter were used to create Botanicus Interacticus, an exhibit where ordinary plants were turned into interactive objects which might as well have been imported from a magical forest in a land far, far away.

Another field of research Disney is investing in is haptics. Here, something called reverse electrovibration was used to control the friction between a finger and a touchscreen in order to simulate the tactile sensations of different materials. In a similar vein, tactile feedback was added to gesture based interfaces by using a small and very precise air cannon. Although we are all familiar with touch and gesture interfaces, such feedback is still very novel, unexpected, and therefore, magical.

Eric and his team also work with light. One example used two handheld projectors which projected both visible and invisible light. The invisible light lets the two projectors communicate their relative position to each other, changing the images projected in the visible spectrum. Although this was quite a rough demo, it is has obvious applications for games, where two players can interact in a simple, novel and unexpected way.

The technology Disney Research develops often ends up in Disney theme parks and toys, where the illusion of magic must be maintained. Therefore, all of the examples have one thing in common: the technology used is always hidden. It is a means to an end, a means to enhance an experience and tell a story. This makes Eric and his team somewhat akin to the Wizard of Oz; the men behind the curtain, using cutting edge technology to perhaps trick us into believing that there is still magic left our world.