Do it with Everyone – Recap from FITC Amsterdam 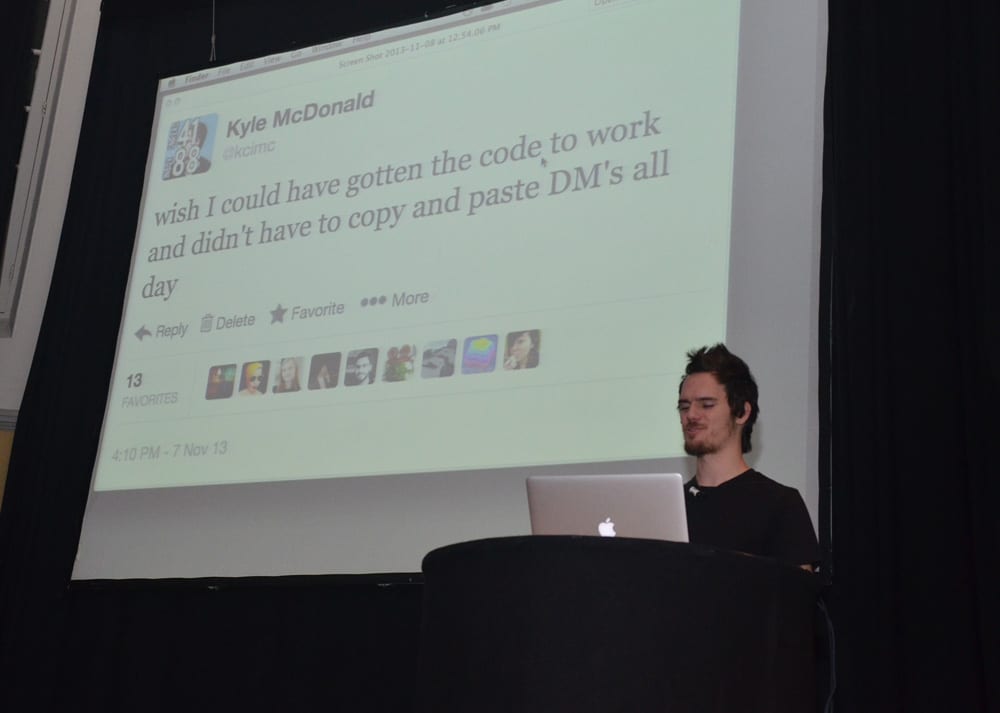 As the title of his talk suggests, collaboration is an integral part of Kyle McDonald’s work. He is an artist, avid tool creator, and contributes to platforms like openFrameworks. While Kyle certainly isn’t the only creative coder who has embraced the open source paradigm, the various projects he discussed in this session made it clear that he takes it a step further than most.

The first type of collaboration Kyle talked about was collaboration with amateurs. In this context, an amateur isn’t someone lacking proficiency, but someone motivated by passion rather than employment. Seeing these enthusiasts engage with the tools and code libraries he created made Kyle realise that the community can produce much more together than he ever can alone.

Kyle also collaborates with friends. While he often works together with other creative coders, he emphasised working with people outside his domain. Here, he can use technology for projects he never would have thought of by himself, like improving the quality of conversations on Google Hangouts, or making the perfect pair of jeans.

For a lot of his work, collaboration is not just the form, but also the subject. To better understand the role of privacy in his live, Kyle created a keylogger that tweeted his every keystroke for an entire year. For another project, he placed microphones in public places that would post conversations they picked up to Twitter. Last year, he relinquished control of his digital identity entirely by allowing anyone to post tweets on his behalf.

The project that made the biggest splash happened in 2011, when he investigated the facial expression (or rather the lack there of) people have when staring at computers. He created a small piece of software that made a laptop camera take a picture every time it detected a face. He then installed this software on every computer in a New York Apple Store. After having gathered enough pictures, he displayed the results publicly in that very same Apple Store. Apple was not pleased, which resulted in a visit from Electronic Crimes Task Force, marking his first collaboration with the Secret Service. While that experience was both unexpected and unpleasant, the discussion that ensued online was a huge inspiration to Kyle.

From open source to open identity, Kyle certainly isn’t afraid to put himself out there. He has a deep interest for creating conversation, whether around the tools he creates, or the topics he explores with his art projects. Doing it with everyone has taught him a lot about himself, and has enabled him to work on interesting projects with interesting people from all over the world. The conversation is happening, and Kyle invites everyone to join in.