Eric Socolofsky – Between Execution and Experimentation is “Awesome” 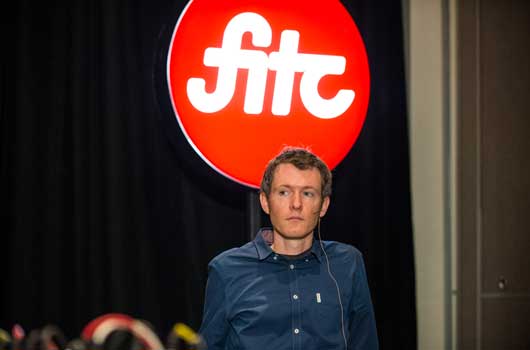 For a living case study on innovation, leadership and renewal, FITC attendees heard about Flickr’s fall and ongoing revival from front-end engineer Eric Socolofsky. One part history lesson and one part war cry, mild-mannered Socolofsky took listeners through the history that made Flickr the first king of online photography, and the company’s ongoing mission to win back the crown.

As a mere sapling in the online media world, I did not know anything about Flickr’s legacy in the digital media space. Socolofsky uncovered Flickr’s origins as Ludicorp’s online social network called “Game Neverending.” The original founders Stewart Butterfield and Caterina Fake noticed that the most popular element in the game was the ability to share and discuss photos. They spun off Flickr and a new story began.

Key social elements we take for granted today like “faving,” tagging, geo-tags, and page modifications that did not require page refreshes (using Ajax) were all cutting-edge in Flickr’s heyday. The user base grew quickly—and continues to grow today—although Flickr’s current share of daily global photo uploads is far smaller than what it used to be.

Post-Yahoo acquisition, Socolofsky described a different phenomena. As leadership was reshuffled, the company drifted a bit. Different developer groups actually found they had downtime, allowing a non-user-led creativity to take hold. That led to passionate projects like Flickr.com/places.

Making time for side-projects “in the margins” is important, Sokolofsky said, but doesn’t always come naturally to goal-driven teams. That goal-driven culture flowed back into Flickr following Marissa Mayer’s entry as Yahoo’s CEO.

The two working styles, however, need to strike a careful balance. Straight-line thinking and project management certainly help get things done. Random exploration, on the other hand, helps make the next discovery. According to Sokolofsky Flickr is going to have to do both to truly make it “awesome again."