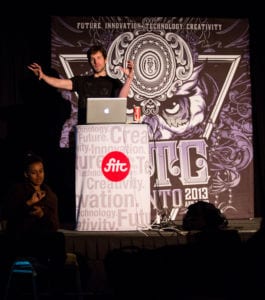 Bradley G Munkowitz, who also goes by GMUNK, brought some of his work and insight to FITC this year in his presentation Designer Lap Explosives. With the impressive body of work that he has, it’s humbling to see that his first efforts were simple experiments with photography, illustration and video.

After creating a lot of work with experimental design, he got a lot attention with his Mandingo Immortal work. The recognition led to being part of a panel at a past FITC, which led to meeting Joe Kosinski. Joe really enjoyed GMUNK’s work so, when set to direct Tron: Legacy, he jumped at the opportunity to work with GMUNK. The project would be a great learning experience for GMUNK – he went so far as to say it was his greatest learning experience – in particular a two-month process of creating the final graphic for the Solar Sailor sequence that resulted in less than three minutes of screen time.

For GMUNK, working on big projects for long periods of time, while rewarding in its own way, often leaves him bored. He remedies this by doing a very different and personal project. In this case, it was an introduction video for a conference called Flash on the Beach. The interpretive dance video contains a metaphor for the creative process: from the blindness of not knowing where to begin and feeling unsure to full-blown inspiration.

An important thing he took away from the project was to not compromise on your vision. Unfortunately, he had on this project – he wanted a glowing LED floor but, due to constraints, it wasn’t feasible. He still looks back at this work and wishes he had done more to preserve his original vision. Also, with this project, he met a group of lighting designers who would become collaborators in the future as well.

He worked with dancers again on his next video project Semi-Permanent, which is a video project that used projection and the Microsoft Kinect to create an interesting effect; the Kinect would read the movement of the dancer and would project a large version of it over the dancer, which casts a shadow, making there be several instances of the same pose. This was another project he wasn’t completely satisfied with but it was a learning experience, nonetheless.

When Joe Kosinski was set to direct another feature film, this time Oblivion, he requested GMUNK do some user interface graphics for the film. The result was interesting work that set a visual tone for the film. But, once again, this kind of work made him bored.

Which leads us to his latest project. Teaming up with the lighting designers that he worked with for his Flash on the Beach video, he created a triangular prism with LED panels and used vj software to create an incredible effect. He then used the prism to create the opening titles video for FITC Amsterdam 2013.

GMUNK’s body of work is impressive and it’s clear why he gets to work on such cool projects. His next frontier is “Op Art” and on reflecting on his work, he shared a simple piece of advice that helped him: Go beyond the brief. Exceed the client’s expectations and do personal projects – do what you like and what speaks to your soul. His first project was a reaction to his girlfriend that left him for a roofer and everything that’s come since has been reaction to that. His parting words on art included: ‘Reference, devour. Nothing’s original. Steal things… if you do this, your work will be authentic. Authenticity is invaluable; originality is nonexistent. Celebrate your thievery.’