Aram Bartholl has been working in Berlin since 1995. He studied architecture at the University of the Arts UdK Berlin and graduated there in 2001. His art work has been shown worldwide in festivals, galleries and musems such as Ars Electronica, Transmediale, TENT Netherlands, Eyebeam New York, Enemy Gallery Chicago, eARTS Shanghai, NIMK Netherlands Media Art Institute, KAdE Amersfoort, Kunstraum Kreuzberg, Skulpturenpark Berlin, Total Museum of Contemporary Art Seoul, FACT Liverpool, Microwave Hong Kong, Museum of Modern Art Weserburg Bremen,, LABORAL Spain and the MoMA New York among others. He received the 17th Video Award Bremen in 2008, the Browserday Award in 2001 and an honorable mention of the Transmediale Award in 2007. He was artist in residence at V2 Institute for unstable media in Rotterdam 2009 and resident at EYEBEAM, New York.

Aram Bartholl is a member the NYC based ‘Free, Art & Technology Lab’ aka ‘F.A.T. Lab.’ In his art work Aram Bartholl thematizes the relationships between net data space and public every day life. “In which form does the network data world manifest itself in our everyday life? What returns from cyberspace into physical space? How do digital innovations influence our everyday actions?” Through his installations, workshops and performances Bartholl developed a unique way to discuss the impact of the digital era on society. In his series of physical objects recreated from digital space and a series of light installations he questions the technology driven society and the tension of public on- and offline space. Workshops interventions and performances in public play a central role in his interest to create offline social platforms and situations to discuss day to day life in the era of Google, Facebook, Twitter and co. 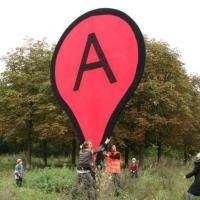