The Other Singularity – Recap from FITC Amsterdam 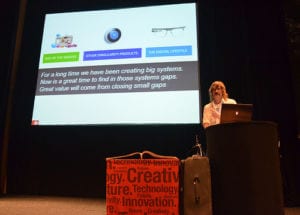 Every year there is a talk that just blows you away. Perfect alignment between speaker and topic. For me, that was this year’s talk by Jared Ficklin. It blew me away. And I’ve been talking with people about it ever since.

Jared started his talk about “the singularity” – economies with no money. Superhuman capabilities. Eternal life. Uploading your consciousness to Github in the sky. Rapture of the Nerd kind of stuff. Something that has been written about since the 1950s. But this talk is not about that. This talk is about “the other singularity”. Mundane uses of technology. Right now is the rise of the makers, everywhere you see cheap, playful computing that change the future and the now, technology in unexpected places. Heck, even toilets are equipped with technology. Jared showed us a project where they projected visuals on “port-a-potties” depending on if the user was sitting or standing. Very funny but completely useless. But people were lining up to see and use it, in contrast to what the event organizers thought they would do. They even created a port-a-potty version only for humans and only for robots. Of course, everyone wanted to try to be a robot by trying to open the lock to the toilet by replaying a light pattern being projected on the ground. Loads of fun.

The next project he showed was an RGB LED painting installation, and he stated an interesting point; right now this costs as much as a cheap second hand car, but technology is and will become cheaper over the years – in a couple of years this RGB LED setup will cost as much as wallpaper. And probably can be applied as such.

All the projects Jared showed were fun and sometimes appeared to be meaningless but when seen in the greater scheme of things they all point to something bigger.

He brought up that in 2005 you could buy a MacBook Pro for so much money and it could do so much. We thought. On of the downside of the current trend is that all these devices are based on the concept of personal computing – there is no interaction with other humans or at least not a lot. All of these devices create a cognitieve tunnel between device and observer. Staring into them makes us walk into canals. So in a sense the are very evolutionary. Or very counter evolutionary? You decide.

Right now we can buy a thermostat that has more computing power than that 2005 MBP. Remember that both devices carry a 800Mhz ARM processor. But now it can do so much more than back then. What if we could take the money from that 2005 MBP and see how many computers with a single use we can buy now? The mission is to get 1000 computers for 1000 dollars. We are at the moment in time where experiences do not have to be trapped in apps. Things that used to be apps now sit on the wall or on your ceiling. Think of an umbrella with an API that connects to a weather service which triggers a blinking light when it is going to rain.

“Think by making, deliver by demo.” 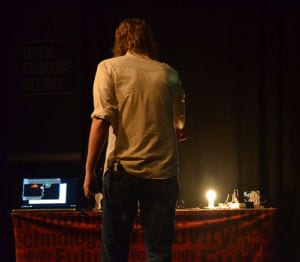 The next pattern in computing will not be personal but collaborative.  More than one person will be able to use a system – and at the same time. Jared’s belief is that the next computer will be the room – but how do you interact with a room? He created smart bulbs that are equipped with a camera, a projector and a bunch of other sensors that allow for interaction. And he also created a wall socket with sensors – just like HAL9000.

He also did an onstage demo where he would talk to a computer and the lights would turn on, send a tweet or order take out. By looking at a specific direction, the system would project the output wherever he was looking. It really felt like Jean-Luc Picard of the USS Enterprise. Jared’s Dutch friend created a system with sensors, where a user would sit in front of a computer and follow the users eyes and acts after the user. Social mimicry by a machine at its best.

In the coming years, 5 at the most Jared predicts, makers will fill all the tiny gaps between man and machine. The future is bright – but the now is more exciting. This is really happening. Mind blowing talk by a great speaker.