Recap: The Journey, Not the Destination with James White 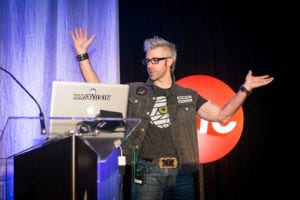 James White is no stranger to FITC, always offering attendees a journey through his inner childhood passions and aspirations as a Canadian graphic artist and designer. Whether we're talking his love of video games, comics, pro wrestling, or film, James has a way of effortlessly bringing out the magic in each of his interests, and sharing them with the world.

James has this air of coolness I, and I'm sure many others, find refreshing. It's part of why I love covering his talks. James so freely explores his potential without worry as to whether it is a lucrative career.  He lives by his own rules, something he expresses in his latest talk at FITC Toronto 2014, The Journey, Not the Destination.

Of course, living those dreams is still a big challenge, and something he spent a good deal of his life pursuing and actively expressed this journey in his talk. Not only did we learn a thing or two about dealing with business negotiations with clients, but also in finding and harnessing both style and vision through his artistic inspirations. Mimicry is a great way of honing in on your skills and finding your own vision through it. Too often do people compromise what they believe in for their client without any thought of what they can offer through their own personal vision.

That could potentially be the biggest issue in setting yourself apart from the rest is actually staying true to your beliefs, yet there is a common misconception that one must do so in order to get by in life. Not so, according to James, who strongly expresses a sense of individuality. The biggest challenge is finding that very thing that makes you tick, living by that vision and letting it change organically as you mature.

Having seen James countless times at FITC events, I've gotten a good dose of what he loves and aspires by, but there's also a sense of mystery in what he will create next whether that be a retrospect series of classic gaming consoles, cameras, films, etc. I believe that change is what keeps people so interested in his work as he so freely lets it become whatever it wants to become. That transparency unites us, yet still manages to fascinate us with each and every one of his creations. If there was ever a person who truly has lived by their dreams, big or small, it's this guy.

You can find him on Twitter at @signalnoise or on his blog at blog.signalnoise.com

Erika Szabo (@erikaszabo) is a Freelance Blogger and Vlogger living in Toronto. Her love for technology knows no bounds. You can find her musings at Eggplante, xoxoamore and Youtube.