One of the highlights of FITC Toronto for me, have always been the
Adobe keynotes, with Adobe showing off all sorts of cool new features from upcoming software that is still in development. However, these days there are more Flash/Flex and Adobe-based conferences around the world, especially with the growing success of FITC, I wondered if Adobe would have anything new to show. Or would it be very similar to previous keynotes, especially FITC Amsterdam 2008, which happened just 2 months ago, and for which there’s videos online?

Well, Adobe announced a few small but cool features that haven’t been shown anywhere else for Flash Player 10 (code named Astro) and Flash CS4 (code named Diesel). Plus they emphasized that this is all scratching the surface and there’s a lot more to come. I imagine there will be more features trickling out at various Flash conferences through out the year, while saving the really big announcements for Adobe MAX 2008. 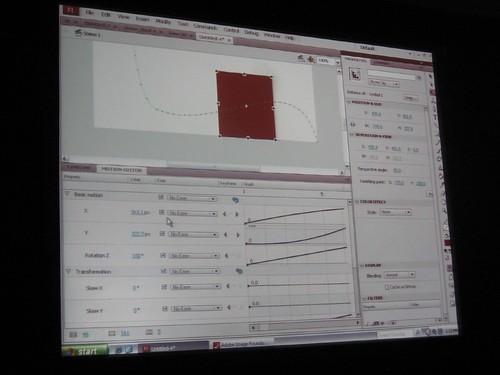 Motion Editor
The screenshot above almost explains the feature in itself. Basically, it’s a breakdown of every attribute of a Flash symbol that can be animated, so that you can fine tune a tween in way that was never possible before.

[youtube 0GAbMRj0IV0]
New 3D Tool
It’s been known since last year at MAX that Flash Player 10 will support a Z-axis, but this is the first time it’s shown how it will be accessible through Flash CS4. Now unfortunately, because of the low quality of the video it’s hard to see, but when a symbol gets selected there’s a circle in the middle of the symbol, with 3 arrows representing the X, Y and Z axis. Select these arrows and move the angle of the arrows and it changes the axis of the symbol. This allows for quick and easy 3D tween. 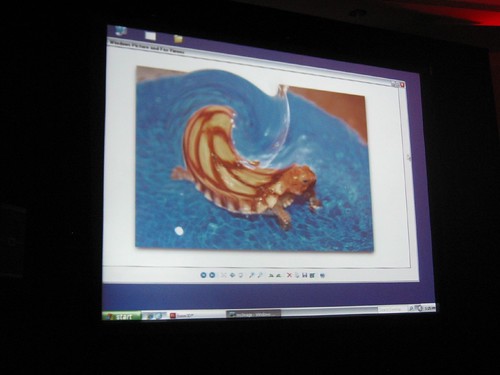 No more 2880x2880 limitation!
Another small feature, but important for certain developers is that in Flash Player 10, they will be removing the 2880 pixel limitation! For those developers unaware of this limitation, every since bitmap data was introduced into the Flash Player, there’s been a limitation on the size of bitmaps. Bitmap data could not be bigger than 2880 pixels width or 2880 pixels height. This was to reduce the amount of RAM being used on a user’s computer at one time. I’ve hit his barrier myself when creating panoramas inside of Flash with very wide images and more recently with AIR. An AIR application currently can only be 2880 pixels wide because of this Flash limitation, which means that you can’t create a dual-monitor AIR application that will stretch over two screens, but are instead forced to have two separate windows for each screen. It wasn’t mentioned by anyone from Adobe on whether this 2880 limitation will be lifted off of AIR, but since the latest version of the Flash player is imbedded into AIR, I assume this will be the case. However, I hope to talk to someone from Adobe later on in the conference to see if I can confirm this.