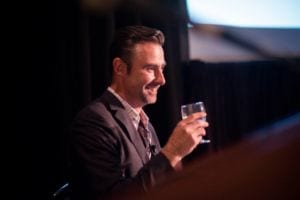 Adam R.T. Smith is a man with a strong opinion, and his talk on MVP: Minimum Viable Product vs. Maximum Value Product didn’t pull any punches. Adam set out to “arm you with the tools to be the advocate for quality, experience, and feature-completeness in the face of pushback from up top – whether that be a client, or your boss”, and coming out of his talk I was well armed indeed.

Adam began by dispelling some myths about app dev today. Sure, the global apps business is generating about $25 billion this year, double what Hollywood made in 2012, but according to Canalys, 25 developers accounted for 50% of app revenue in the Apple App Store and Google Play in a 20 day period they studied. And he showed Flurry stats revealing that 62% of apps are removed within one month of download. Many more, he pointed out, are probably unused since we often don’t delete software we’ve paid for even if we’re not using it. The message: Most apps fail, so let’s not kid ourselves that we’re all doing it right. 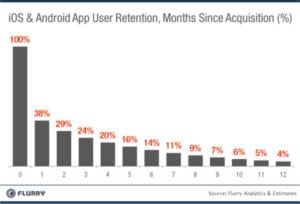 With this setup, Adam also laid the foundation for one of his key messages – we have to look beyond the promise of Minimum Viable Product to the actual results it is driving in our product development. This is a pet theme of mine, because every popular methodology I’ve worked with has great promise but many drive the wrong behaviours and decisions, and ultimately bad results. I believe it’s essential that we take note of unintended consequences no matter which framework we’re using and Adam made that case really clearly.

Moving to his core topic, Adam laid out both the benefits and shortcomings of the popular Minimum Viable Product approach popularized by Eric Ries, author of The Lean Startup. 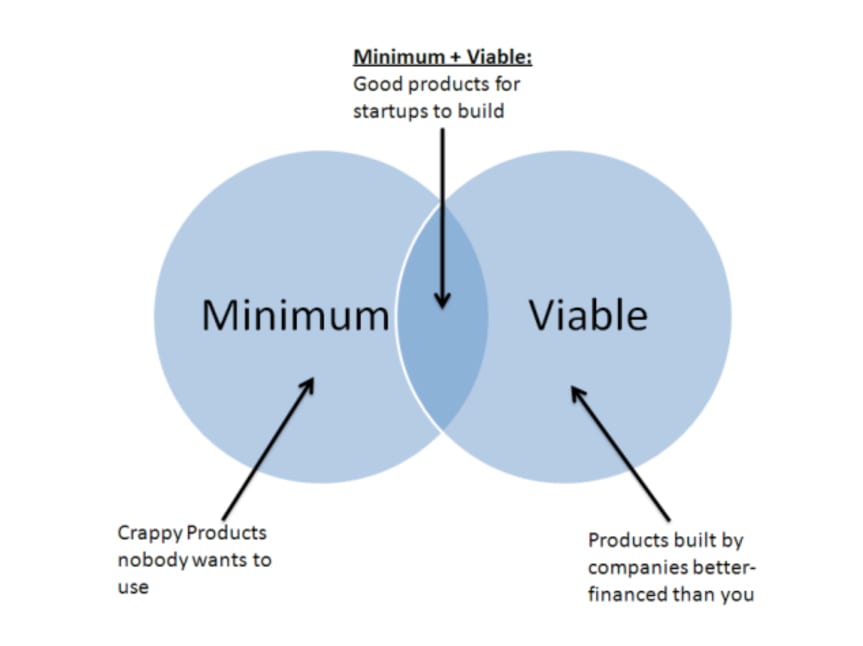 He acknowledged MVP’s advantages like getting market feedback sooner and cheaply, and validating assumptions early and often. That’s all great stuff. But too many teams, Adam noted, focus on the “minimum” and not the “viable” and that’s where the trouble starts. The worst problem with Minimum Viable Product, he said, is how it is being interpreted.

Adam laid out several problems with the way this approach is implemented in the field:

Worst of all, he says, going to market early disrespects users and many use it to avoid facing and solving hard problems. It moves accountability from the team to the market, giving the team excuses for failure instead of driving them to deliver a product customers will love. 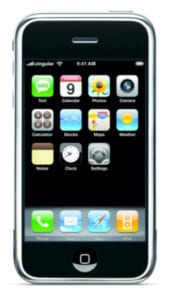 The idea behind this alternate MVP is to deliver just the features that customers will value most and deliver them exceedingly well. Adam noted that while the original iPhone didn’t have search or copy/paste, it gave users what they wanted (browser, iPod and phone in one) and it did so brilliantly. Customers fell in love with the user experience and they got enough value to keep using the product despite alternatives with more features.

“Maximize value within features you do build,” says Adam. “It’s about sweating the small stuff obsessively.”

With Maximum Value Product, Adam says, “Do what you do exceptionally well.” I couldn’t agree more, no matter which methodology you adopt.  Just as “agile” is often implemented as if it meant “no requirements clarity needed”, Minimum Viable Product can be a recipe for failure if you don’t avoid the pitfalls Adam outlined. Where that’s a danger, there’s a strong case for Maximum Value Product and Adam Smith made that case for us at FITC Screens.

Adam Smith presented MVP: Minimum Viable Product vs. Maximum Value Product at SCREENS 2013. You can see the slides from his talk here. Above photos courtesy of N. Maxwell Lander.

Sandi Jones is a technical marketer, product developer, geek and unconventional entrepreneur. Currently, she is Founder and President of Unconventional Wisdom, a boutique business and technical consulting company, and Head of Product at SqueezeCMM, a marketing analytics startup that recently joined Extreme Startups.