FITC: AIR + Photoshop: What Happens When They Talk? by Dr. Woohoo

For years now a number of well known Flash designers with a knowledge of coding have been using Flash to create programmatic artwork. Joshua Davis' trick of converting Flash vector art into post-script has allowed designers to import Flash art into Illustrator, with certain limitations. Now Dr. Woohoo shows how it has been taken to the next level by creating SWFs that communicate with Photoshop and Illustrator.

The first example was bringing SWFs into Illustrator as palettes and then using them to create artwork inside of Illustrator CS3. The communication between CS products and Flash happens using something called ExtendScript, which is similar to JavaScript or ActionScript 1. It got really interesting when Dr. Woohoo showed that these are not just static SWFs inside of Illustrator, but could make calls to the internet and load in other files. Once such example shown was a Flickr gallery, which when an image was selected the colours of the image were used to create an Illustrator Swatches palette.

Dr. Woohoo's work has got the attention of Adobe and he is now working with them on CS4 and quickly showed some examples in an early beta of Photoshop CS4. Bernd Paradies is apparently the person inside Adobe responsible pushing integration between CS products and SWFs even further with the upcoming CS4.

However, there's a lot that can be done currently with Photoshop CS3 and Dr. Woohoo demonstrated an amazingly cool example where an AIR application sends commands to ExtendScript which controls Photoshop CS3. Examples where shown from basic examples of simply opening documents, to programmatically adding images and strokes. The good doctor demoed how to paint randomly on the Photoshop animation timeline (I, as well as many of the crowd didn't even realize that Photoshop now has an animation timeline) which were eventually output to video. 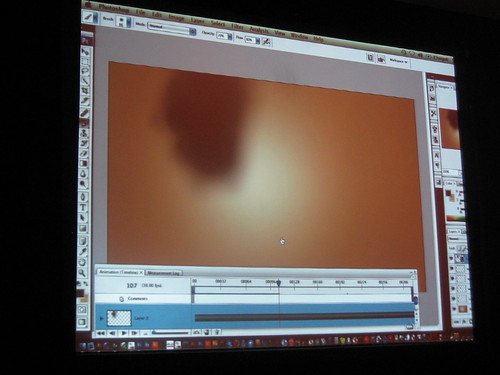 Then Dr. Woohoo wooed the crowd with one of his more recent video pieces created with AIR and Photoshop and it was just astounding.

Here is a link to an example of Dr. Woohoo’s video work that I was able to find online. It wasn’t the piece that was shown, but gives you an idea what he’s producing with AIR and Photoshop.