Experimenting at the Edge of Digital: Robots, Technology and Natural Interactions with Riccardo Giraldi 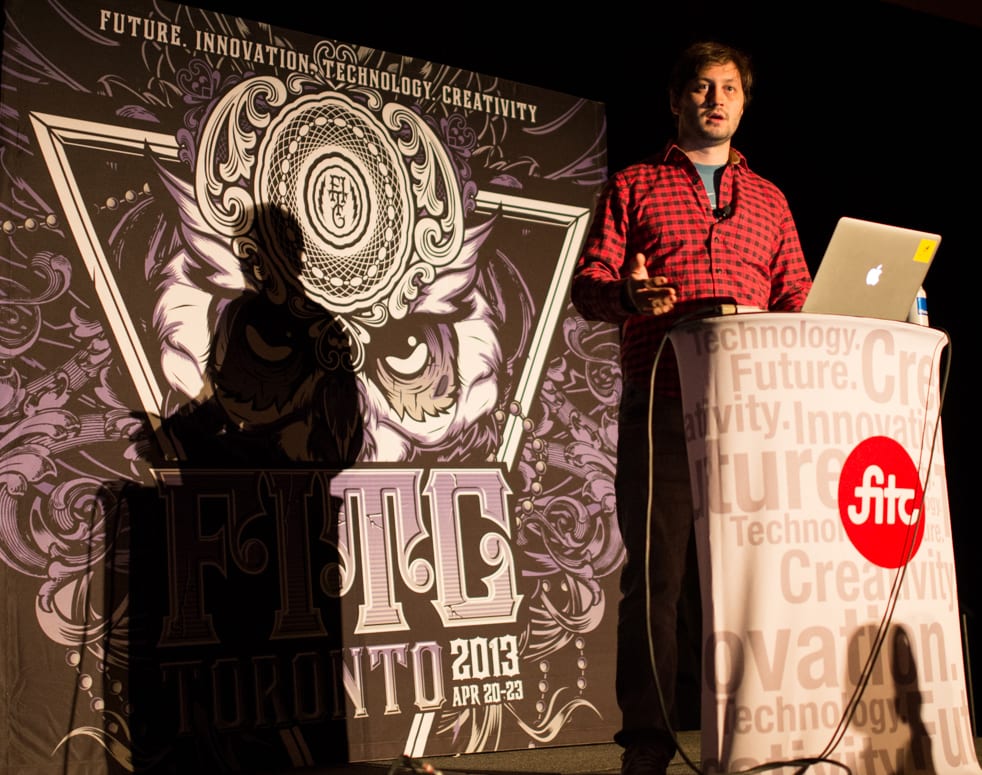 Riccardo Giraldi’s love for film, music and digital inform the projects he takes on for his agency named “B-Reel.” One of his goals is to tell stories using technology and to make things that have never been made before.

The first project he shared in his presentation Experimenting at the Edge of Digital: Robots, Technology and Natural Interactions was a collaboration that resulted in Google Web Labs – a collection of digital experiments that revolve around collaboration, making music and real world output. The specific experiment he worked on was a sequencer that people could manipulate online that would affect actual instruments that were kept at the London science museum and could be viewed through a video feed.

The next project, titled Hotel 626 for Doritos was an effort to make a creepy and scary interactive web experience using one’s webcam, microphone and phone. Only available from 6pm to 6am to ensure ambiance, the campaign was a great success.

Bug Run paired real bugs, online betting and a live webcast to create a most unlikely sports event sponsored by Volkswagon, DDB Stockholm and Betsson. The event was quirky enough to find an audience and successfully promoted the brands for their respective products: The Volkswagon Beetle and Betsson’s live betting.

From these learning experiences, Riccardo advises to young up-and-comers to invest in the projects that you believe in, which is easiest if you own your own agency or are a freelancer. The rewards you can reap from working on the things you believe in far outweigh any paycheque. He pairs this with the cautionary advice that, while the spark of ideas can come from anywhere, it’s important to validate them: what works on paper may not work in real life.

“B-reel” is also in the process of developing products. Their idea for Escape Flight is to provide more than what the standard travel websites offer. Those sites only display a price and don’t consider other factors. Escape Flight is specifically for weekend getaways and takes into consideration the length of flights, the weather, the price and activities. Although it’s only offered in London right now, they plan on expanding.

As Riccardo explains, “B-reel” is also a homonym for “be real”, meaning they want to have a hand on tangible products as well as the aforementioned digital projects. Examples of this are the Mitsubishi LiveDrive campaign where people can control a car from their computer and an interesting game called Fashion Shoot encourages people to stain clothes with a squirt gun they control from their computer, sponsored by Ariel laundry detergent.

All of this leads Riccardo to question if people are too dependent on technology. To reflect on this notion, he illustrates his point with a child interacting with an iPad, then being frustrated when a magazine doesn’t react the same way. After all, this is the first generation that will have these kinds of interactions so it will become standard.

Also, those technological things that are awkward or frustrating to us will evolve to be more intuitive and easy. The example he uses is the evolution of the camera, which started from the “camera obscura” which needed a lot of human work to get results and now cameras are more convenient and easier to operate.

The inspiration for these advances come from science fiction and magic and we often take such advances for granted. To end his talk, Riccardo recommended some books that have recently inspired him so that we may also be inspired: 6 Thinking Hats by Edward de Bono, Abundance: The Future is Better Than You Think by Peter H. Diamandis and Steven Kotler and Physics of the Impossible by Michio Kaku.