Bring Leading Edge Thinking to your Team – and your Clients

Rethink Communications’ Creative Director, Dre Labre is constantly looking ahead for the chance to get a creative jump on new trends in the industry. That’s probably why he can say he was an early FITC Toronto adopter, attending and even speaking at FITC Toronto as far back as its humble beginnings in 2002. Dre remembers that even back then the focus was on being inspired and learning something new, and as the creative head of one of Toronto’s busiest ad agencies, the aspect continues to appeal.

“I want my guys to go to a conference and get something out of it, it has to be productive” he explains, “I want them to get invigorated, motivated to try something new, and get that overall boost in morale. I want them to say I sent them to something cool.”

What Dre expects when his team attends an FITC conference is value – and not just for his agency, but for his clients.

So how does FITC benefit both your company and your customers and why should you think about sending your team? The conference is one-of-a-kind for creatives working in technological fields. It challenges employees with incredible ideas that educate and inspire them to evolve what they bring to the table on client work.

Felix Wardene, VP Director of Creative Technology at Leo Burnett is responsible for digital production, leading a team of developers, project managers and graphic professionals he sends to FITC year after year.

“We hire the best people and we want to keep them inspired and fruitful. FITC is a great expo of everything that’s out there – they see something amazing, they want to know how to do it themselves.”

Felix says being inspired by something you haven’t seen before is key.

“I tell everyone on my team – ‘you’re not just developers, you’re partners in creative execution’, I want them exposed to whatever is out there that will support them doing that. FITC helps them raise their hand to put new ideas forward because they’ve been exposed, and that’s the point.”

Adrian Belina, Founder and Creative Director at Toronto-based Digital Design and Development Agency, Jam3, agrees that FITC is food for the brain.

“It really is the only one of its kind. It’s atypical, completely un-boring, it’s nice to see what can be done and how people are doing things in parallel industries, so you can take ideas and apply them to what you do to get a fresh, unique take.

FITC Founder Shawn Pucknell says professionals should care about the 2014 conference because they want to stay relevant.

“There’s a risk in limiting your opportunities to experience innovation outside your day-to-day, I’ve seen it happen with myself,” admits Shawn. “Sometimes a job or an entire industry becomes a silo unto itself, and you don’t necessarily get influences from outside art, technology, hacking culture or film – other than your social media feed, these things aren’t in your world.”

Shawn’s mandate is that FITC brings these influences together to introduce attendees to eye-opening new ideas.

“The keyword is challenge – we challenge you to think outside the box,” says Shawn, “that expression is overused but so relevant – we all live in cubicles, studios, boxes - FITC lets you get out of that regular sphere of influence and get exposed.”

Dre is primed for his Rethinkers to reap the benefits at the 2014 conference. 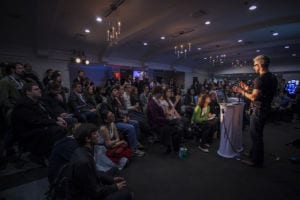 “Some of the names Shawn has curated are a first – no one else in the world is talking about what they’re talking about, so I’m looking into sending people this year more than ever before.”

Tickets are on sale now for FITC Toronto 2014, available at fitc.ca/toronto and eventbrite.com. Flex passes are of particular interest to employers – a transferable option between attendees for the duration of the conference.