Our brains have 200 trillion synapses – give or take a trillion or two. Human brains are actually the most complex system in the known universe.

Given its overwhelming complexity how do you explain how the human brain works to high school kids?

Charlie Taylor and Backyard Brains have found a way but instead of talking synapses, they explore spikes – an information unit of the nervous system – by measuring the waves of electrical energy (lasting 1/1000 of a sec). 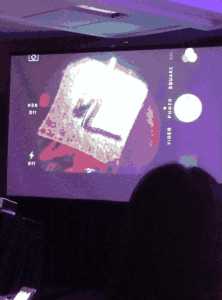 By infusing technology, including the use of smartphones, Backyard Brains has made accessible the work of Galen, René Descartes, Baruch Spinoza, Jan Swammerdam and Emil du Bois-Reymond.

Prior to five years ago (before the Backyard Brains approach was developed in a maker space in Ann Arbor, MI), a similar demonstration would require an amplifier (approx. $2,600) and an oscilloscope (approx. $3,500). A full lab of tools would cost about $200,000.

Instead the demonstration requires two pieces of technology:

Taylor demonstrated the tracking of waves through a live volunteer Madagascar cockroach, which was first immersed in ice water to “anaesthetize” it. He then removed one of cockroach’s legs – an act that the roach doesn’t feel or mind.

Through the “microscope” using the phone’s camera, Taylor demonstrated the oscilloscope sensing the waves of energy from the knee jerk reflex in real-time.

The microscope itself also provided an impressive close-up of the hairs and detail of the cockroach leg. It also serves well to zoom in to other stuff like the living cells of a red onion.