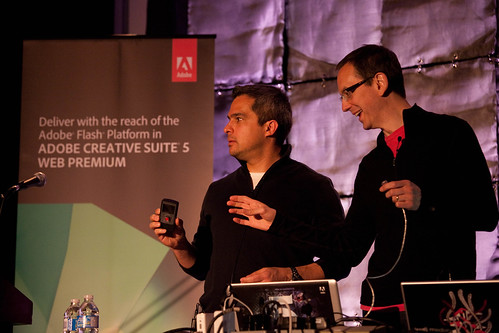 Today is day one of FITC Toronto 2010 and there is plenty to be said by the Adobe representatives here. I missed this morning's Flash Platform Workflows with Andrew Shorten as I was busy making sure the festival was free of tech problems.

Coming out of the lunch break, Lee Brimelow gave us the run-down on just how easy it is to create multi-touch enabled applications in Flash. There are a basic set of gestures that you can implement, such as pinch and rotate. In addition to the predefined gestures you an also access the raw touch data to implement your own gestures. At this point Flash is capable of reading two touchpoints but Lee suggested that they are working on adding more in a future release.

It's been awhile since I've seen Device Central demo'd but seeing it now being used to test multi-touch on modern devices like the Nexus One is impressive. Seems like this has come along way towards making it easier to test your device deployments.

The big show today is the Adobe Keynote with Richard Galvan and Mark Anders. To get the crowd going they started out by showing the two most discussed features in Photoshop CS5: puppet warp and content aware fills. Puppet warp lets designers create a triangle mesh around an object they want to warp and then drag points around as the object intelligently adjusts itself based on how you distort it. Content aware fills let you remove a part of an image and replace it with seamless generated fills that match the existing content.

Getting into Flash, Richard showed the hardware acceleration for video playback on netbooks. Mark took everyone through a series of demos on various devices showing how great the mobile browsing experience is with both standard sites and mobile optimized sites when Flash Player 10.1 is installed.

One particular demo that stood out was a 3D metaball that Ralph Hauwert created running on the Google Nexus One. You can poke and prod at the ball with your finger and it runs as smooth as it would anywhere else.

Lots of multitouch demos using AIR 2 on an old Windows tablet computer. It's impressive to see how well this works even on an older tablet device.

Workflow demos of Flash Catalyst were the first I've seen where they are showing round-tripping between Catalyst and Illustrator. Taking a button component created in Catalyst back into Illustrator actually shows the context of the component in the application you are creating and also gives the designer access to edit each state of the component on different layers.

Getting into Flash Professional, Richard showed the move to the new XFL format for saving your projects. Inside the XFL is a library folder that contains all the assets found in your Flash app's Library. What's particularly amazing about this is that you can edit the graphics inside the XFL library using another editor and the changes are reflected live inside of Flash. Essentially this is enabling multiple people to work on a Flash project at one time. It also makes it easier to use source control with Flash.

The big question for me that Galvan answered is that Adobe intends to support the development of third party apps for working with XFL by publishing the schema for it.

One of the simplest new features, but possibly my favourite, is that Flash Professional can be used seamlessly with Flash Builder to edit your Actionscript code. You can even build and test your movies from within Flash Builder but actually using Flash Professional to do the compiling and debugging. The ever popular ctrl-enter shortcut has been added too, making swapping between the two tools very easy.

Galvan next showed text control in Flash - the 'demo' of underline drew applause and laughter. Yes Flash really hasn't had underline until now. Multiple columns and text flowing are clear benefits of having the Indesign team available to help with Flash.

This is probably the first time Indesign has ever been demo'd at FITC. In exchange for the text work that the Indesign team did on text in Flash, the Flash team has given their animation engine to Indesign allowing the addition of animation and other interactive tools into your Indesign layouts. You are able to publish SWF's directly from Indesign. I can see this being useful for people creating one-off brochureware type stuff. More interesting is the export to XFL option to do further editing and improvement in Flash. All the animations and text formatting is brought over, however Actionscript code is stripped out, at least for this product cycle, because the generated code was too challenging to work with.

Clearly the emphasis on this product cycle is integration and workflow across CS5. They've dabbled in this before but it looks like they may finally be on to something.

Stay tuned for more about CS5 over the next two days.