Dan is a BAFTA-winning freelance creative technologist, digital artist, games designer and live visual performer from Manchester, UK. After spending the last few years building squishy digital content for millions of small humans with BBC Children’s, and then a year on the bleeding edge with BBC Research & Development, Dan now operates as a multidisciplinary creative tech gun-for-hire across mobile, web, installation and beyond.

When he’s not doing all that, Dan is a live performing visual artist, using homegrown software and tools to create improvised large-scale visuals for concerts, festivals and arts installations. Dan is a prominent member of the Algorave movement – an ongoing series of electronica events where all music and visuals are created entirely with live code and process, which is shared with the audience as part of the experience. Dan is also an accomplished live video artist and VJ, and has performed at scales ranging from countless sweaty basement chiptune shows right up to a headline slot at the legendary Superbyte Festival, and a recent Algorave session at Blue Dot Festival, in the shadow of the Lovell radio telescope.

Dan is a passionate advocate of open source software and shared process, and strives at all times to expose not only the source that powers his work, but also the code, assets and chaos generated during the work itself. He is also a regular author and contributor to livecoding and computational creativity workshops, and is currently engaged in a series of successful Gamedev 101 and Creative Coding sessions, and has spoken on the subject (and made loud noises and abrasive bright colours) for the likes of Resonate, Reasons To Be Creative, Code Mesh, BLAB etc. 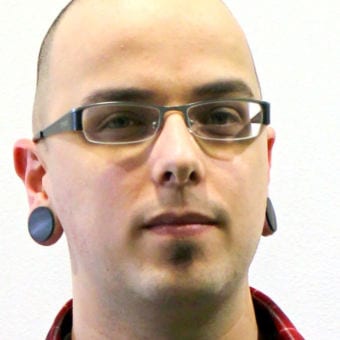