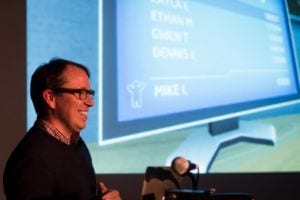 Let’s get serious here, video games are no longer just child’s play. Since the early 2000s, the video game industry has become one of the leading forms of entertainment, and has generated a huge amount of revenue over the years. The industry has become such a success that it’s even blown past movie, book and music industries with its interactive approach to technology.

Love them or hate them, video games have come a long way over the years and are now even being used as promotional aids for big companies like Honda, AT&T, Ebay and Intel. As Ben Unsworth, Co-Founder of Globacore Interactive Technologies, explains in his SCREENS 2013 talk Serious Games, infusing gamification into a marketing campaign might be just what you need for your company.

Having worked with said clients along with many more, Ben is a big candidate of applying game theory into his projects as a way to communicate brand stories. Doing so can help increase engagement, create viral networks and support lead generation, it’s essentially a form of interactive advertising that’s fast, fun and incredibly creative.

So you might be wondering: How are these mechanics useful in marketing? “Games provoke positive emotion,” states Ben. “[They create] a positive emotional experience [which] ties in with your client’s brain.” The very nature of video games allow the player to achieve the feeling of flow and “fiero”, one of the most neurochemical highs we can experience.

What makes gamification so powerful? The key components of game theory are Status, Social Connectedness, Metric of Success, Immersion Reality, Competition, Statistics Ranking and Leaderboards, Personalization and Self Expression. Together these components help bring social interaction and immersiveness regardless of whether or not you’re a gamer.

Whether we’re talking about Globacore’s “Make That Meeting” Intel campaign with the Kinect, Paperdude VR with the Oculus Rift, Honda Indy Trivia Racing Game or the AT&T Sphyro campaign, there’s nothing more positive than the unity video games can provide. That positive experience, in turn, may potentially attract new clients to your company just as publishers attract gamers to developer’s games. The possibilities are practically endless, who knows where this progressive industry will take us?

Erika Szabo (@erikaszabo) is a gaming, tech and sexuality blogger living in Toronto. Her love for technology knows no bounds. You can find her musings at Retroware TV, Eggplante, xoxoamore and Youtube.