Recap: The Age of Human Augmentation with Tim Cannon 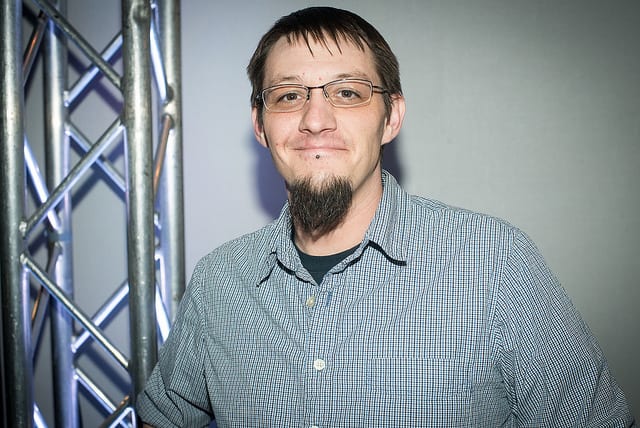 While most of us are excited about wearables, biohackers and grinders are already taking the next step – human augmentation. Tim Cannon, a software engineer whose passion has always been to be a cyborg, is Co-Founder of Grindhouse Wetware, a research and development group dedicated to creating open source human augmentation devices. Tim brought us into this world of experimenters and world changers who are more curious than risk-averse, and committed to ensuring that human augmentation is not the sole domain of large corporations.

So what the heck is biohacking? In simplest terms, biohackers use the human body the way hackers use computers. For example, Tim was inspired by another grinder, Lepht Anonym, to implant a magnet in his finger.

When he found that he could feel magnetic forces as a sort of buzzing sensation, he realized he now had an additional “sense” that most of us don’t have. Then Cannon went further and built a device to use that data for a range finder that allowed him to navigate blindfolded, and implanted devices in his arm and hand with other capabilities. He is working on commercializing an implanted device he calls Northstar that triggers actions based on hand movements much like leading edge wearables are just beginning to do today. (He called it Northstar because it glows brighter the hand gets closer to the north, allowing the user to see or feel directions.)

Biohackers face challenges finding safe components to implant, and they turn to body modification artists for help because doctors won’t assist, presumably due to fear of liability and professional or legal sanctions. That means no anesthesia to reduce the pain, and no medical advice to reduce the risk. That’s how committed they are to the cause and to satisfying their curiosity.

But it’s not all fun and profit for Cannon and his colleagues. They are delving into serious issues of privacy, and ownership over the data produced by our bodies, whether through external devices or implants.

Cannon told us about a friend who has a cochlear implant, a medical device that allows profoundly deaf people to hear. His friend was angered to learn that the device’s capabilities had been deliberately limited to what natural human ears can perceive, depriving him of a sense that would be possible without the filters. He was further angered to find that access to the data from the device is restricted to doctors and technicians. Cannon makes the point that once a device is in our body, it is part of us so why don’t we own the data?

Then there is cost and equal access to consider. Many people cannot afford $100,000 heart surgery but if low tech solutions can be built and brought to market, more people can be helped. Business doesn’t always prioritize open access to innovations, but open source innovations, says Cannon, can help make sure longer, better lives aren’t the sole domain of the rich.

To learn more about the work Tim Cannon and his colleagues are doing to augment humanity using safe, affordable, open source technology, check out Grindhouse Wetware or the biohack.me forums.

Sandi Jones is a product developer and business consultant who has brought tech products to market for large companies like Rogers as well as small startups. Since 2012, she has run a boutique services firm called Unconventional Wisdom that works with both startups and large enterprises turning new technology into successful products. Most recently, in 2013, she led the transformation of a marketing agency's internal analytics tool into SqueezeCMM Inc., now a successful graduate of Extreme Startups.