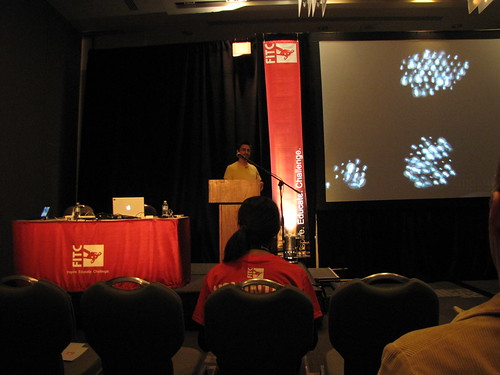 "Lets push this further..." Dr. Woohoo repeated many times during his very inspiring session at FITC Toronto. Through out the session he was definitely pushing things into interesting directions, getting various applications communicating to each other and taking the audience step by step through examples showing his process of how he ended up where he has.

He showed examples of communication between custom buikd SWF files in a Photoshop CS4 panel to create custom artwork. He had worked with examples of Keith Peter's "Making Things Move" ActionScript animation book to randomly create paths in Photoshop. Also Dr. Woohoo in responding to an audience question mentioned that communication is not just limited to the SWF sending commands to Photoshop, as you can actually listen to Photoshop events and react to them in the SWF.

He also showed an example of communication between CS4 applications using Adobe's Switchboard. When greeted with a strange Illustrator error, he mentions "That's cool" to the amused audience as he mentions that he loves breaking stuff.

Beyond just Adobe applications, he showed a lot of work he's been doing by combining OpenFrameworks with Maya creating randomized images in 3D space. He would use various libraries in the open source OpenFrameworks and then create a socket connection to Maya to send it properties and even dynamically create MalScript files. After creating these abstract shapes he was applying strokes and filters to create interesting pieces of 2D artwork.

Always looking for different sources for the abstract art, he had an example of a webcam, with facial recorgnition that tracked him as he moved around sending that information to Maya to create 3D artwork. 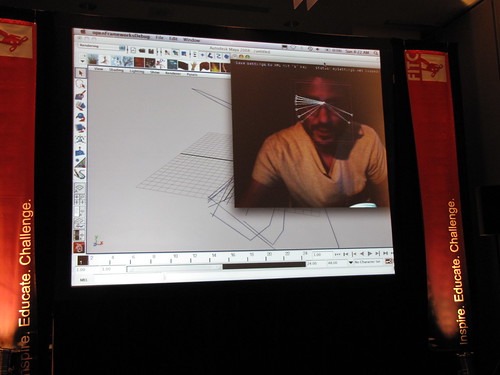 Here's a cool video from the session where the source of 3D objects is music and he shows as he's able to change the properties of the object in real time, changing the colour and other properties.

One of his inspirations was watching glass blowers which he brought into his digital work by creating random cylinder objects with the microphone providing the random data. So he was actually able to blow into his microphone and create these cylinder shapes. Continuing again one step further, he used music to generate these objects, as seen in the video bellow:

Anyone interested in seeing some of the end results of his artwork check out Dr. Woohoo's blog.