Beyond Interaction with Daito Manabe 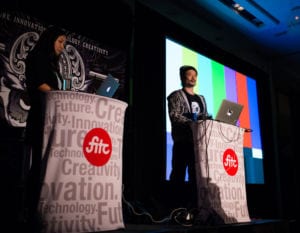 If there is an award for the speaker who packs the most examples into an hour talk, Daito Manabe is a front runner. Despite the challenge of presenting through a translator (Manabe spoke in Japanese), he kept us engaged with a rapid fire tour of his fascinating creative projects. Manabe could also be the “poster boy” for FITC, embodying the intersection of Future, Innovation, Technology and Creativity.

While I didn’t know what it meant going in, I can’t think of a more apt title for his session than “Beyond Interaction”. Daito Manabe describes himself as an artist, designer, programmer, DJ, sound designer, hacker… but those labels really only scratch the surface. His experiments with light, sound, body movement, electricity, and more combine art and tech in very unusual ways. Words can’t do justice to what Manabe showed, but his YouTube channel is a treasure trove of fascinating videos. 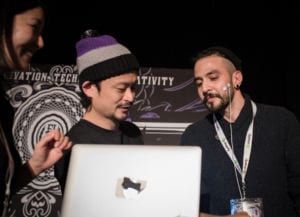 Early in the talk, we were introduced to his work using sensors responding to the body’s electrical signals and translating those signals into sound and light as his dancers and other subjects moved or clenched muscles. Later he added projection mapping where lights seem to flow from and with the dancers.

All of Manabe’s art is infused with passionate geekery, never more evident than when he expressed his delight upon learning that myoelectric sensors have effectively no latency because they respond to the body’s electrical signal prior to the actual movement, so there is time to transmit signal to the lights and sound and synchronize them with the dancer’s movement.

Not satisfied with just sensors, Manabe moved on to the reverse– electrical stimulation devices to induce movement. Watching his eyes twitch or his model’s arm raise based on inputs reminded me of the life-changing technology implanted in a member of my extended family, allowing her use of her arms and hands after she was paralyzed from the neck down. But here, similar technology is combined with light, sound and other movements to create fascinating art. In this video his colleague becomes essentially a musical instrument as Manabe “plays” him. 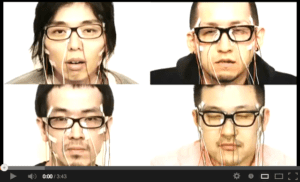 Another experiment combined input and output, retransmitting those inputs to another person, trying to copy his expressions to others’ faces. He lists this experiment as a failure but noted, “Success is not my goal.”

Over the course of an hour, Manabe took us on a journey through a fraction what’s possible when you combine technology with an incredibly creative mind.